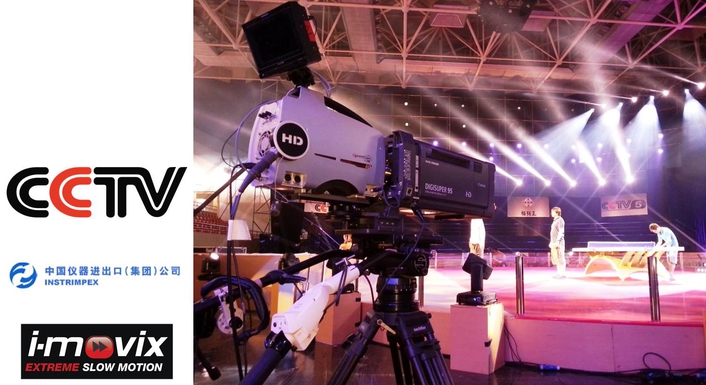 CCTV initially encountered the SprintCam system when it was used in Beijing in 2008, and they took delivery of their first SprintCam Vvs HD in 2011, supplied by INSTEC, the exclusive Chinese agent for I-MOVIX.

“From the moment CCTV first contacted I-MOVIX in 2008 we have paid close attention to the system’s development,” said Jiang Baining, Senior Engineer, who used to serve as CCTV’s VP of Broadcasting Department. “CCTV first purchased the SprintCam Vvs HD through INSTEC and put it into use for broadcasting in international and domestic sports events. It creates wonderful effects for live broadcasting, and we used it to great effect in FINA 2011 and China Open Tennis broadcasting. Our experience led CCTV to enlarge its fleet of SprintCam Vvs HD systems, and we are looking forward to more new products from I-MOVIX in the future.”

The SprintCam Vvs HD broadcast system already has achieved unprecedented success in sports production because of its unique combination of image quality, light sensitivity, flexible broadcast integration, and easy, out-of-the-box operation. The system, delivering from 25 to 2,600 fps in 1080i or up to 5,600 fps in 720p, with instant replay, comprises the latest generation Vision Research high-speed HD camera; an operational control panel that provides a real broadcast-quality color matrix and control of frame-rate choice; a slow-motion remote that allows the user to select a video sequence and instantly replay it with an HD-SDI output for live broadcast or storage on any EVS server for a later use; and the camera control unit, which provides control of the slow-motion instant replay, camera control, and data interface between the camera and the EVS server.

“Extreme slow motion photography technology did not exist in China when I-MOVIX first established a presence in Beijing in 2008,” said Wan Yan, General Manager, Instrimpex Instec Import & Export Corporation. “Since then, we’ve had very strong interest in these systems, with several important Chinese TV stations purchasing SprintCam, and many more including it in their purchasing plans. We have a lot of confidence in this technology and our ability to maintain I-MOVIX as the market leader in China.”

About CCTV
CCTV, China Central Television, is the major State Television Broadcaster in mainland China. CCTV has a network of 19 channels broadcasting different programs, documentaries, entertainment, sports, etc. and is accessible to more than one billion viewers.