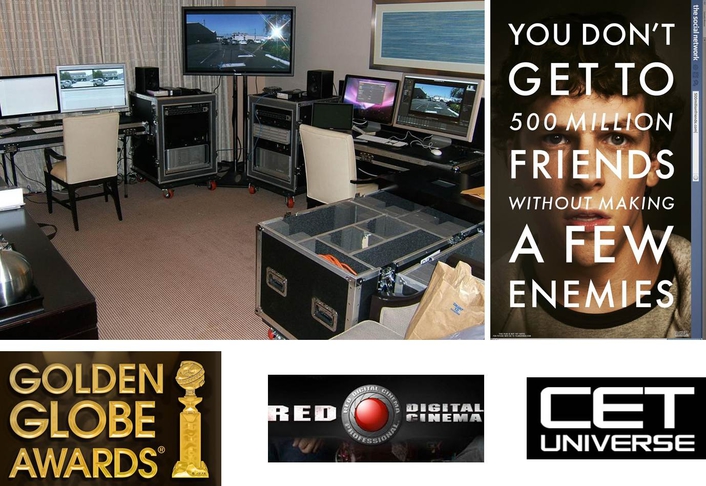 CET Universe’s Designs Enabled Digital Dailies and Archive for David Fincher Film
CET Universe, a leading provider of services, systems, and solutions for professional audio and video production, assisted David Fincher’s post-production team with their file-based camera workflow on “The Social Network”. The equipment and services provided were used during the film’s entire production, saving time and resources for Fincher and his technical crew. 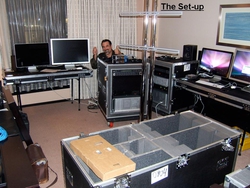 Fincher, the renowned director of such technically demanding films as “The Curious Case of Benjamin Button”, “Zodiac”, and “Fight Club”, used the CET Universe’s Final Cut Pro edit systems and XSan storage Area Network throughout the entire production of “The Social Network”.

Wolcott was tasked with designing a workflow that allowed Fincher to shoot on multiple Red One cameras, archive the media quickly and safely to duplicate LTO-4 tapes, and transcode the files in real time to Apple’s ProRes for editorial. Since production took place in Boston, Baltimore and Los Angeles, the solution also needed to be portable, powerful and stable.

“Red was great – they upgraded our camera sensors, built custom cameras, and collaborated with us to provide David with the ability to over-crank to 36fps at 4K, on a very short schedule. We then quickly needed a new data management system optimized for Red, but able to incorporate the best features we designed into the Zodiac and “Button” ViperCam workflows” said Wolcott. “CET Universe was equally helpful and collaborative. Their engineering team customized a system to suit us perfectly - including a “stripped down” single editor version for Boston locations, and a full blown four station Xsan based system for post in Los Angeles.” 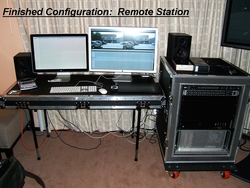 CET Universe’s production technologist Nathan Adams made the initial connection with Wolcott at a CET Universe event in September, 2009, when the company unveiled the new Archive Station R-2 with the RED Rocket card, as well other new products, including the Polaris RAID system.

“I knew right away that Joe was comfortable on the bleeding edge, and he knew that I understood the requirements of these types of productions. He and I spent a few weeks creating a setup that could be pushed beyond the limits of a typical tapeless workflow, and then testing it out ruthlessly,”said Adams. 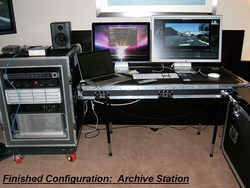 “We engineered the location workflow so that everything in Boston could be completed by a single editor. Even with three cameras rolling, Tyler was able to keep up with production and have everything archived to duplicate LTO-4’s, processed to ProRes for editorial, and processed to h.264 and uploaded to PIX System for dailies, well within a 24-hour period,” said Cahill. “Tyler was able to do the ingest, cloning, processing and picture QC all by himself. He was processing between 50 and 80 RED CF 16GB cards every day. He even did split-screen with camera motion control as well, creating ‘pre-viz’ versions of special effects shots before a location wrapped.”

The initial shoot in Boston lasted two weeks, before moving to Baltimore for a few days and then returning to Los Angeles for the final fourteen weeks of shooting. The L.A. set-up at Fincher’s No. 13 offices incorporated 96TB of Promise V-Trak RAID storage into a powerful Xsan solution with Polaris RAIDs working as an ongoing backup of the entire 96TB SAN for safety. Additionally, LTO-4 tapes were made throughout the process to ensure off-site file backup and safe-keeping.

“The process and products we have created literally changes the game for many productions,” said Adams. “These guys were able to do in a day with one person what typically takes several people several days to handle.”

“Collaboration between filmmakers and digital workflow providers is essential, RED is more efficient, communicative and expedient than any other company we have worked with,”said Cean Chaffin, producer of “The Social Network.”

CET Universe, formerly the Solutions Group of Media Distributors, is a leading developer of next-generation storage and asset management products for video professionals. Founded by its CEO, Steve Klein, the company develops, sells, and services an array of innovative file-based workflow systems for media & entertainment, corporate, and government and military accounts.