CES …The Greatest Show on Earth 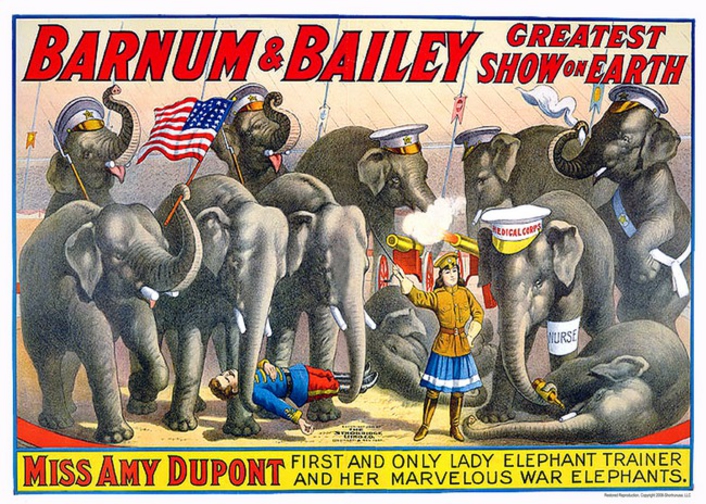 Everyone – except people who have a clown or big crowd phobia – loves the circus
CES (Consumer Electronics Show) is one of the world’s biggest circuses on the globe with acts of all shapes, sizes and quality; each hungering for the cheers of the crowd. It isn’t often you see a lawyer as the ringmaster, but Shapiro (Gary, head of CEA – Consumer Electronics Association) does a pretty good job of handling the tempermental acts.

The main acts (those in the center ring) are the big boys who pay bigger fees to put on their keynote speaker acts. Just like the real circus, some of the acts are good, some bad, some What the ….!!!!

A few of the CES 2013 keynotes – Panasonic, Qualcomm, Samsung – were acts you found interesting, put you to sleep, dazzled, puzzled. The others were phone and car guys.

The Good
Coming off a pretty rough year (you lose a couple of billion and smile), Panasonic president Kazuhiro Tsuga was the first to take the center ring with one of the more focused acts of CES. 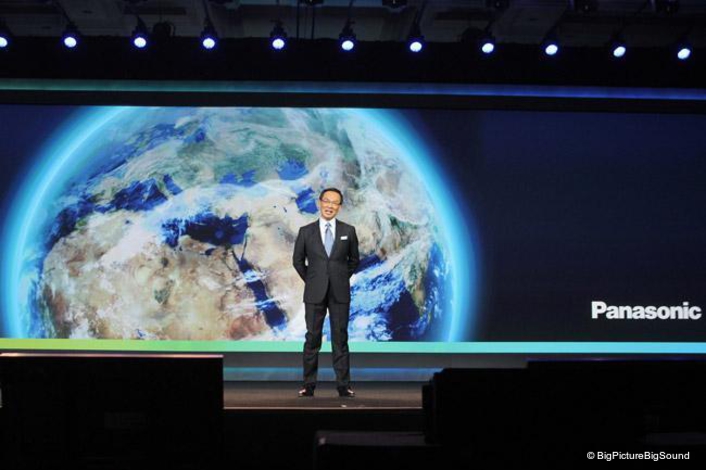 Even though he had the parade of paid personalities you expect at keynotes, Tsuga highlighted the company’s new message as an eco-engineering company saying his people were committed to delivering innovative, eco and smart solutions to the market. 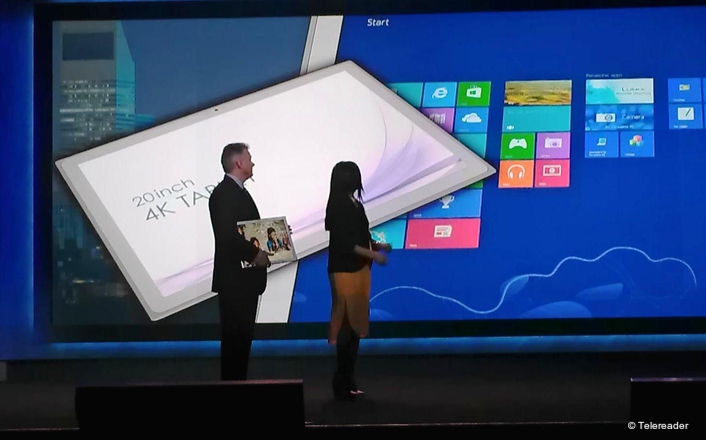 Of course, to show that Panasonic really understands what folks want, the company’s North American boss, Joe Taylor, made a cameo appearance with TV personality Lisa Ling. Oh yeah, and he lugged out a 20-in 4K tablet that someone said was compensating for certain inadequacies.

To quiet the snickering crowd, Tsuga proved he was serious about bringing the company back by saying, “If we are to achieve our goals, the imperative to transform and innovate has never been greater.”

What the…
Microsoft’s Steve Ballmer forgot he had turned over his normal keynote slot to Qualcomm’s Paul Taylor and showed up anyway. Good thing, because the mobile chipmaker’s  boss worked hard to make an IC (integrated circuit) look cool, hip. Unfortunately, Ballmer didn’t give Qualcomm any more lift than his Win 8 did for boosting PC sales. 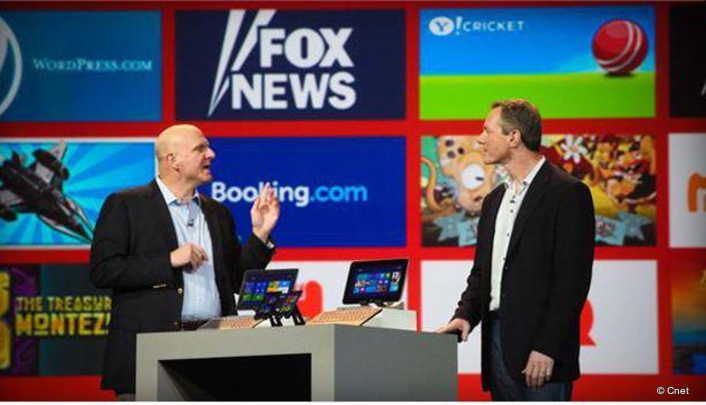 Still, Jacobs was fired up to be on the stage – he said so – of course, you would be too if your company sold 11 billion parts over the years. Lots of them go into the 6.4 billion worldwide mobile devices. That number will soon pass the number of folks on our little blue orb. Working hard to make a great first impression, Jacobs noted that 84 percent of the people say they can’t live without their connected device.

To prove how popular their Snapdragon 800 processors are with faster WiFi links, advanced broadband wireless capabilities and speeds up to 150 MB/s, Jacobs brought in the big guns. He had a parade of singers, dancers, drivers, actors, directors, gamers and … Big Bird! 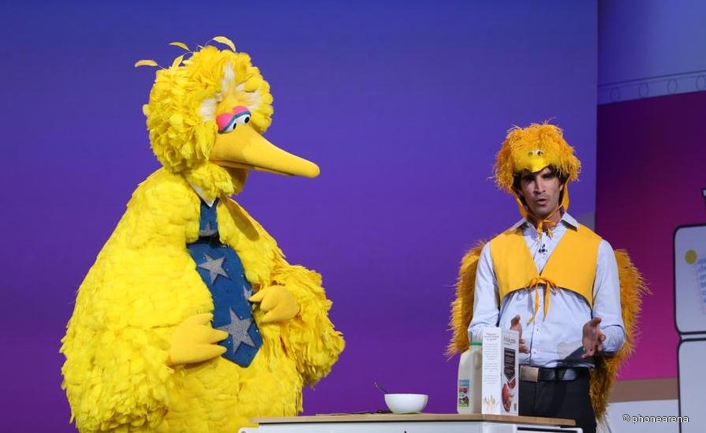 Yes, Big Bird and friend helped blur the lines between the real world and virtual world … It worked for us because at that point, we had no clue as to where we were! Before our brain could settle down, Jacobs threw a recorded message from Archbishop Desmond Tutu talking about how mobile will have a “transformative effect” on health in Africa and around the globe.

With all that going on everywhere and sales growing 27 plus percent to $13B, it’s no wonder Shapiro felt he simply had to have Qualcomm's Jacobs in one of circus’ outer rings. It was “different!”

Wooing, Wowing
If you had just finished your fiscal year with a record $8B profit and soundly beating your lawsuit dancing partner, you’d probably be as upbeat as Samsung’s System LSI business president, Stephen Woo.

While the company was hyping everything from washers, dryers, ultra- ultra-HD TVs, bendable displays, oh cripes everything; Woo and several of the firm’s senior executives were on stage to show Apple what it was going to miss by ignoring their 8-core Exynos 5 Octa processor. 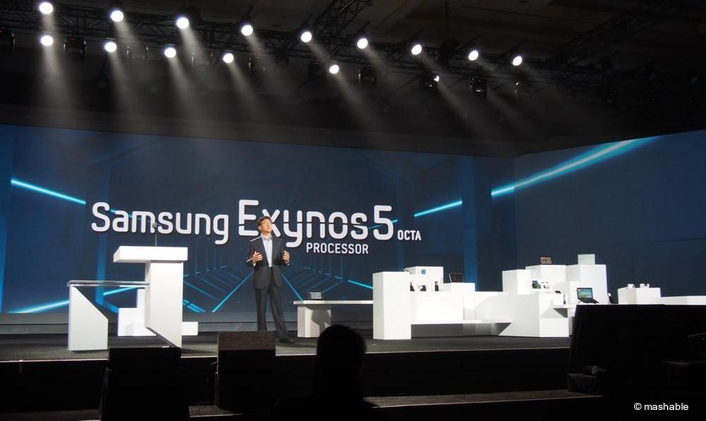 Woo said the chip was designed to deliver a level of pure processing power never seen in a mobile device and would finally enable the units to do heavy-duty multitasking. Designed for high-end smartphones and tablets, Woo said the processor would easily handle HD streaming movies without dropping frames and would deliver razor-sharp picture quality. Focused on selling stuff with his keynote, Woo was wowing the audience with facts about the world’s first mobile chip based on ARM’s big.LITTLE architecture.

According to Woo, “It's an architecture that gives you all the power you want to run intensive apps, but is smart enough to conserve energy when running more basic tasks. Ultimately, we are saving energy and prolonging battery life." Woo confirmed the whispers about the company’s next-generation flexible display technology that would let you bend and fold your mobile devices.  Proving that Samsung is a whiz at engineering, but not so good at naming products, he said the new technology was called YOUM.

It’s super cool and “virtually unbreakable” but there was no pricing or availability mentioned at Woo’s keynote. With a flawless sequel, Woo again wowed the crowd by introducing former U.S. president Bill Clinton to discuss how technology was advancing the Clinton Global Initiative. He was also at the keynote as ambassador of Samsung Hope for Children effort, which educates children in the developing world and partners with the Bill Clinton Foundation. 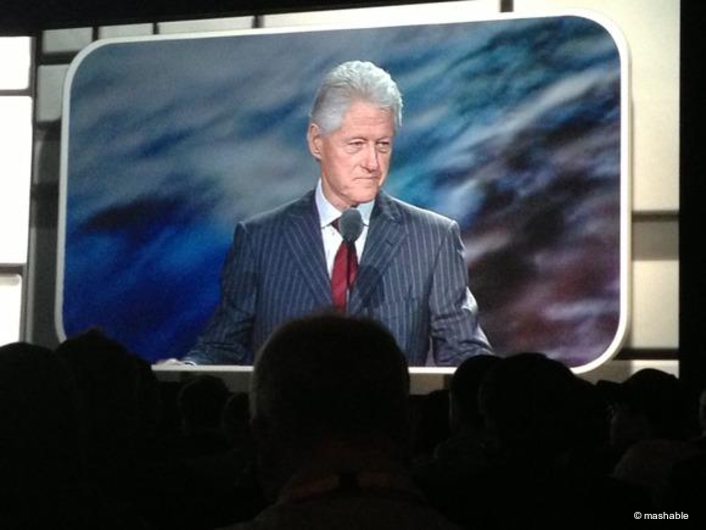 Proving his ability steal the scene, Clinton joked, “When I became president, the average cellphone weighted five pounds.” During his 30-minutes of owning the stage, Clinton also pointed out that South Korea is number one in the world for download speeds and the U.S. is 15th. “Our speeds are one fourth of South Koreas,” he said pointing out that technology would help the world move forward. Turning to his other pet subjects, he urged the audience to help address gun control, climate change, and the ways technology can topple governments and boost developing economies and bigotry. “The world has huge challenges,” he said, “and I think technology can help solve them.”

Too Big?
After hearing a number of the keynotes, some attendees said that CES was on its last leg, pointing out that organizations like Google, Apple and a few others weren’t visible at the show. You saw Google on every screen when folks started a search.   They were busy your searches and clicks, fanning the flames of CES excitement. Apple?  Sheess, there were a gazillion great to mediocre to stupid cases for the iPhones, iPads. Every new phone, new tablet, every phablet was touted as the Apple killer.

We’d like to see Shapiro limit the amount of space any given company could rent for the show. It’s impossible to get around an exhibit that takes up 37 football fields to even hope to see a fraction of the 3,000 plus cocky to desperate exhibitors from around the globe.

CES doesn’t need to have a bigger venue, Shapiro needs a bigger whip!