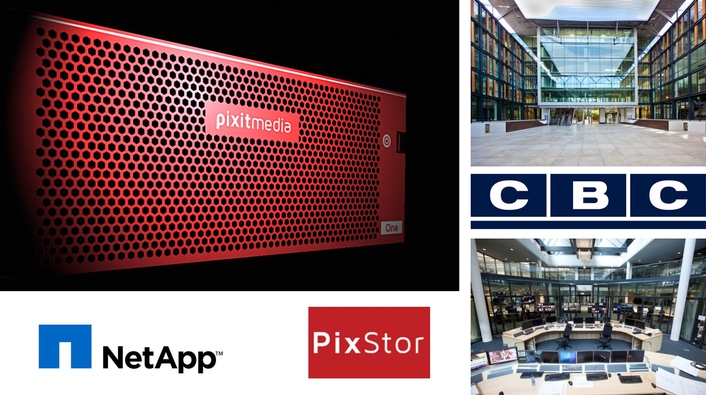 "Although CBC's legacy storage infrastructure gave them the basic media bandwidth they required, they quickly found they needed additional enterprise-class scalability, reliability, and support to guarantee video throughput for all of their graphics and edit workgroups," said Barry Evans, CTO, Pixit Media. "Given their needs, we knew immediately that a mix of the NetApp E-Series all-flash and hybrid systems would best support their video and audio production needs."

CBC's new storage system is part of a facility upgrade to replace an aging existing infrastructure within the graphics and postproduction area to better support broadcast operations. CBC's core requirement was for a centralized video editing and graphics production storage system that could deliver files using standard protocols over IP rather than legacy Fibre Channel. The new infrastructure had to be able to play back hundreds of video streams, including HD and ultra-HD video formats, as well as audio for Steinberg Nuendo workloads. CBC needed a software-defined storage solution to scale the system without making forklift upgrades and a single storage namespace split into multiple storage pools to handle different workloads. The platform had to work with both Mac® and PC operating systems. In addition, all the video content in the file system had to be replicated remotely so that there would be two copies of the data for disaster recovery.

About NetApp
Leading organizations worldwide count on NetApp for software, systems and services to manage and store their data. Customers value our teamwork, expertise and passion for helping them succeed now and into the future.