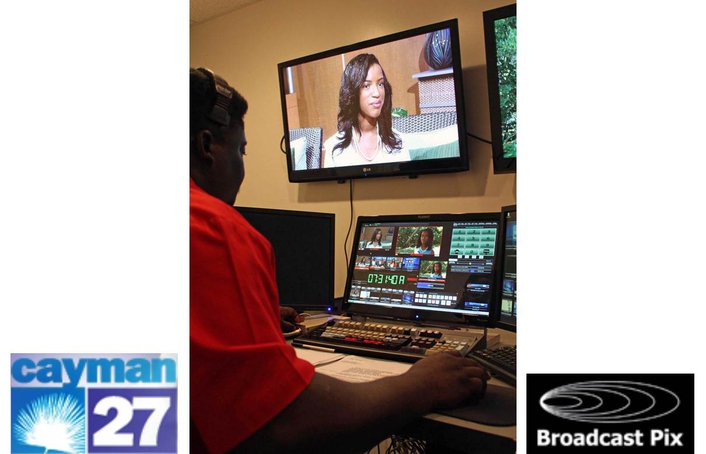 “When it comes to an election, there is nothing more important than the numbers. For the first time in Cayman’s history, the results on the screen were up to date and current – not an hour old,” said April Cummings, Cayman 27 news director.

Located on Grand Cayman, Cayman 27 serves an audience of about 55,000. The station has had its Granite Desktop for about a year and uses it to produce 15 hours of local news and talk shows each week. According to Cummings, a single director uses Granite Desktop to switch the program, playback packages from the built-in Fluent™ Clip Store, trigger animations, and add lower-thirds. “The system provides an opportunity to focus our limited resources while putting out a quality product,” she added.

Before Broadcast Pix, election coverage was less than ideal for Cayman 27. “Our workflow before required information to be relayed by phone from the command center to a graphics operator – who could never type the data in quickly enough,” Cummings recalled. “In addition, the reporter on scene was busy doing live shots and couldn’t preview the information before it hit air.”

To cover the country’s July 18 referendum on single-member constituencies (one man, one vote), which ultimately failed, Cayman 27 created a special table on the backend of its Web site, where the reporter on the scene input election data. Back at the station, a small Java program downloaded the .XML file, which was linked to Fluent Rapid CG.

“Every minute, the program checked for new data and updated it immediately,” Cummings explained. “It minimized errors, increased our confidence, and kept viewers up to date in a way that has never occurred on our local TV before. Our new approach even linked to our Web site, so the banner at the top of the page had the latest on turnout and the results as they came in. Our information was on screen before the elections office even had it on their Web site.”

An option for Granite and Mica™ Video Control Centers, Fluent Rapid CG 2 streamlines the creation of data-intensive CG graphics by automatically integrating databases, RSS feeds, and custom actions like scorekeeping into templates. The result is customized graphics with significantly less manual effort. The second generation software delivers faster updates, dual-channel capabilities to update two different on-air graphics at once, and supports Daktronics scoreboards and EZNews news titles. Fluent Rapid CG 2 is ideal for election results and sports coverage, as well as any live productions that feature graphics that change throughout the show.