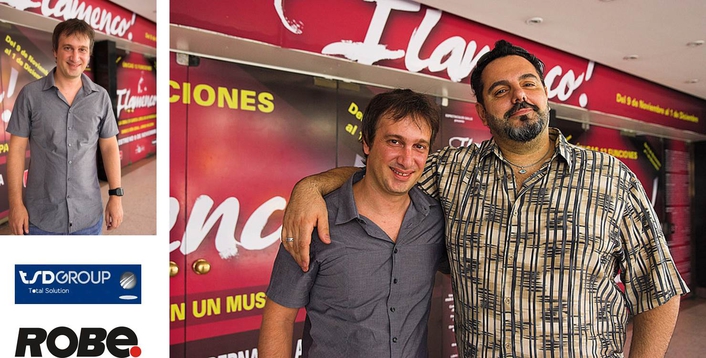 Carlos ‘Charly’ Randich, Daniel Lema (TSD Group)
Carlos Randich – popularly known as ‘Charly’ – together with his business partner Rodrigo Lavecchia run a lighting rental company in Buenos Aires called Lavecchia Randich. They specialize in lighting theatrical and performing arts productions and are one of the preferred suppliers at the well-known Astral Theatre in Buenos Aires. In 2012 they made their first Robe purchase of 24 MMX Spots and LEDWash 600s.

Charlie started his lighting design career 17 years ago working as a technician for several different rental companies and it wasn’t long before he was designing shows.

He also worked for some years as a tech and lighting programmer for famous Argentinian singer / songwriter and dancer Nacha Guevara and then specialized as an MA programmer, working for Daniel Ridano as technical support and console trainer for MA Latin America.

This lead to a myriad of programming opportunities including for prestigious events like Chile’s Viña del Mar International Song Festival and the re-opening of the Colon Theater in Buenos Aires, which were invaluable experiences for making contacts and bringing new business to his rental company.

Charlie first came into contact with Robe products whilst working on a TV show for broadcasters Medcom in Panama City in 2010. He  immediately liked what he saw and wanted to acquire some Robes for his own company.
As soon as The TSD Group was appointed as Robe’s Argentinian distributor in 2012, he made the purchase.

He likes the quality of the optics and the light weight of the MMX Spots and LEDWashes, finds the multiple protocol control options useful and also likes the physical design of the Robe units.

He reckons it’s made a “Massive difference” to their business having Robe in the hire stock, “Everyone enjoys using them on their shows, and people are continually surprised by the range and impact of the effects we can create with them” he enthuses.

He also likes the smooth colour mixing of the LEDs and the finesse of the hues which is very important particularly for theatre shows, together with the ‘proper’ selection of whites and tungsten emulation.

Their first show using the fixtures was for impressionist Martin Bossi at the Astral theatre in Buenos Aires, a show which involved many musical sections, so the moving lights were ideal. Bossi’s new show starts again in January 2014 and LD Pablo Vaiano has asked for the Robes on the rig!

Other recent shows on which they have been used include ‘Y Un Día Nico Se Fue” (And One day Nico Left) at the La Usina Del Arte cultural centre in Buenos Aires.

Robe Hits It Hardwell in Sao Paulo
Robe Gets Its Rizzle Kicks On Tour
Robe Shows its Talent at ...he Viña del Mar Festival