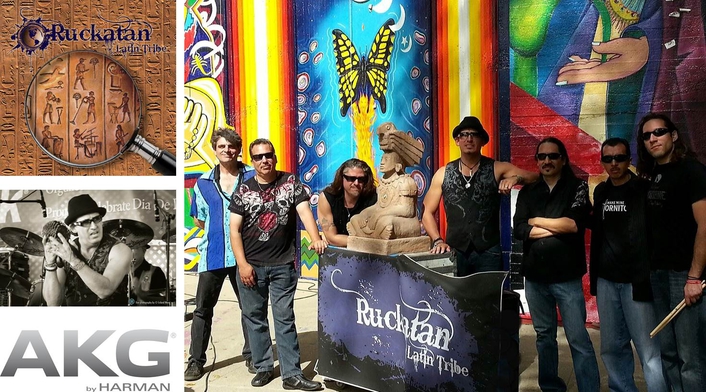 “Having booked 75 shows already for 2014, I’ll be using the AKG WMS4500 system for all of them,” said Elizalde. “There is a lot of movement in my shows, where I jump off risers, dance and perform hand percussion at the same time. We require a solid wireless system, and AKG delivers on that need.” 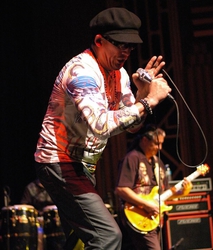 Not only does Elizalde create an artistic fusion between English and Spanish in each Ruckatán act, but he also provides vocals and percussion for Caravanserai, a Santana tribute band. For both acts, the WMS4500 has been key to his ability to produce lively and creative shows.

“I’ve also been using the wireless system in the studio and it sounds killer,” continued Elizalde. “When you transition from wired microphones, the wireless ones tend to sound a little thinner. However, these AKG microphones have such warmth to them. The WMS4500 is a really nice system, as it has the D7 capsule in it, so I know it shares that technology.”

The AKG D7 reference dynamic vocal microphone is a powerful tool for vocalists, as it provides an extraordinarily crisp and clean sound via the dual-layer Varimotion diaphragm. It is extremely durable, and as the very first AKG product that Elizalde became familiar with, provides an unhindered degree of reliability as well.

“I first saw and sampled the D7 wired microphone two years ago at The Secret Studio in Alamedia, California. The next week, I bought one for myself,” said Elizalde. “I fell in love with this product and started touring with it to every location. It is so reliable and easy to operate, since I can just plug it in and start the show.”

“As I’m a part of the Latin community, I’m excited to help raise AKG’s exposure in the Latin market,” Elizalde concluded. “Since these products are both affordable and also high in quality, I believe they deserve more presence in this space.”