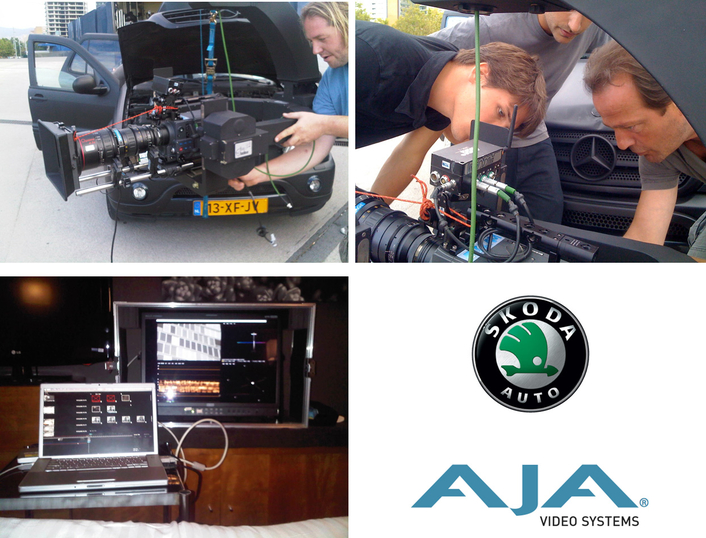 The production realized multiple costs savings and benefits by using the Ki Pros
When AJA Video Systems first announced the Ki Pro portable digital recording device, it was met with great enthusiasm and won six major industry awards. Cinematographers, editors and digital video professionals alike eagerly anticipated this small box that promised to manage everything from recording in native Apple ProRes to up-, cross- and down-convert with handy FireWire connectivity for direct access to files for editing. Director of Photography (DoP) Timo Plogstedt discovered these benefits and more when recording to Ki Pro from the ARRI Alexa camera on a commercial shoot for auto manufacturer Skoda.

The recently released ARRI Alexa has helped to drive the growing adoption of digital acquisition for television commercials. When Plogstedt, a prominent commercial cinematographer, shot his most recent campaign for Skoda in Barcelona, he was able to rent the first Alexa camera shipped to the country along with two AJA Ki Pro units from local rental facility AlciCam.

The kit was used on a three-day shoot for Skoda, producing content that will be used for international television commercials and promotional films starring eight different new car models. Plogstedt was shooting moving car footage the Russian arm (a gyro stabilized crane system rigged onto an SUV). The Alexa was mounted onto the Flight Head, with a cable going right into the Ki Pro which was taped onto the dashboard. Output from the Ki Pro ran to Plogstedt’s two HD monitors as well as to three other SD monitors allowing the driver, focus puller and crane operator to preview what was being shot.

The production realized multiple costs savings and benefits by using the Ki Pros, “Without Ki Pro I would have required an SRW1 recorder, along with a second recorder for previewing—not to mention tape stock, and time and gear to capture from tape, which would have further stretched the budget on our project,” said Plogstedt. “In addition, by recording directly to Ki Pro I was able to have immediate access to files on my laptop on set and after each shooting day in my hotel room. This was convenient as I was able to review shots and tweak levels in Apple Color while we were still on location.”

The campaign’s producer also preferred working with Ki Pro because keeping everything file-based saved the overall production time and money. Plogstedt concurred. “Ki Pro is really small, and is great for the field. The Ki Pro has a very small footprint on a production. It’s very well designed, I like that you have FireWire 800 on the drive and it works perfectly as a plug and play solution.”