Canberra Theatre Centre (CTC) is a lively and proactive arts and cultural hub at Australia’s capital city / territory, comprising three main venues – the 1244 seater Canberra Theatre, The Playhouse which holds 614 people and The Studio, a black box space with 100 capacity.

Around 150 shows covering a wide array of performance genres are staged annually, an eclectic mix ranging from rock ‘n’ roll to choral music, shows to drama, musicals, stand-up comedy and dance – a massive cross section involving a host of one-nighters to much longer runs of 2 or 3 weeks.

Last year, the CTC invested in its first moving lights …which were Robe!

These were specified by head of lighting Andrew Tweedie and delivered by Canberra’s leading entertainment rental and production specialist, Elite Sound and Lighting.

Andrew has worked at CTC for 6 years, and the lighting upgrade with the generous support of the ACT Government, has been ongoing almost since he joined. In 2015 the time came to address the need for moving lights.

Elite’s Darren Russell had seen Robe’s powerful and elegant DL4X Spot at Prolight+Sound in Frankfurt earlier in the year, and thought it would be an ideal solution for the Theatre Centre.

Andrew specified the type of fixtures they wanted on the tender document, but not the brand and model – that was left to be determined by the market through the open tender process. The competitive selection process involved Elite going in with Robe and several other companies offering competitor products! 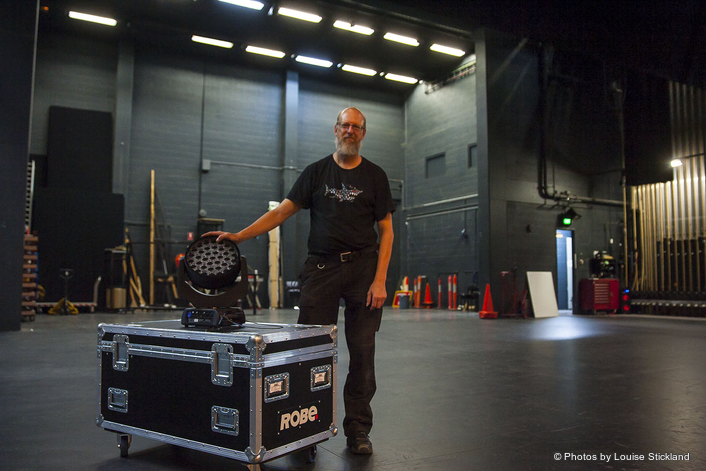 Elite has enjoyed a long and solid working relationship with the theatre explains Darren, but this was actually the first sale that they had completed with the CTC organisation. It was also the first LED lighting investment for CTC.

“I based the specs on what I was seeing with the touring shows bringing in their own rigs or specials,” explained Andrew, “It was absolutely the right time to go for LEDs and all the advantages they offer in lower maintenance and running costs” as well as improving their overall carbon footprint, an aspect under frequent scrutiny.

Also important in the context of occupational health & safety at CTC … is Robe’s commitment to building lighter fixtures. One person can comfortably and safely lift a DL4X and a LEDWash 800, all stacking the odds towards the final decision.

As part of the evaluation process, there was a shoot-out at the theatre – with the Robe options a clear winner, so Elite then won the contract to supply the moving lights, and delivered the 8 x DL4Xs plus 16 of Robe’s LEDWash 800s … which are moved between the three primary theatre spaces. The LEDWashes and DL4Xs proved a more attractive package than all the competition, and shortly after the decision was made, CTC had them delivered and up and running.

Two LEDWash 800s could effortlessly wash the whole of the Playhouse stage in dark blue! The high CRI of both luminaires is essential for producing good, healthy flesh tones which is always a tricky parameter in theatre style lighting, and apart from that, the sheer quality of the light output exceeded that of the competitors.

Having the lights in the house has made “an enormous difference” to how shows can be lit confirms Andrew with a big smile! 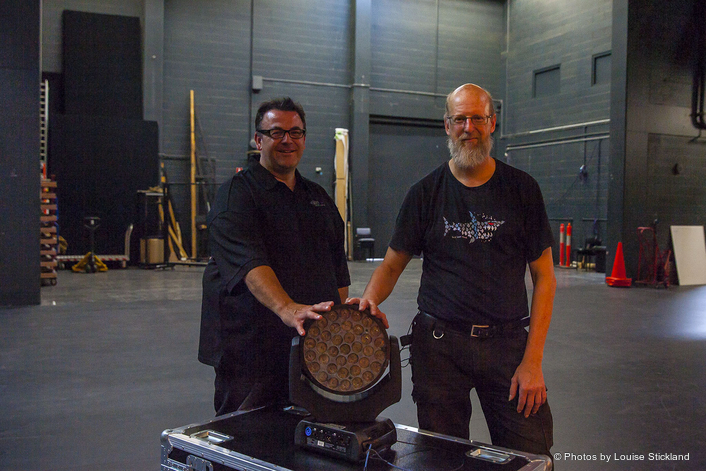 Elite Sound and Lighting’s Darren Russell on the left with Andrew Tweedie, CTC’s Head of Lighting

On several shows last year they didn’t need to use their 2K fresnels at all, such was the efficiency of the LEDWashes … “Eight LEDWash 800s deliver more lighting and colour onstage that our 32 x 2K fresnels,” declared Andrew. For certain shows – like the dance season at the end of the year – they hardly used the standard house rig, and the various dance companies were also suitably impressed as most of them had never had the flexibility afforded by moving lights

“The colours are really rich, while the transition between them is super-smooth and the movement of the fixtures itself is also excellent,” says Andrew.

The relationship with Elite is also an important part of the equation. The fact that they have such a large hire stock of Robe is handy from cross-rental viewpoint, right down to advice and hands-on expertise with the brand.

The Robe fixtures were supplied to Elite by Australian distributor, the ULA Group.

Lighting control – across all venues – is ETC. Andrews works with an efficient crew set up of two full time technicians plus a select pool of regular freelancers who also light most of the shows.

Robe
Canberra Theatre Center
Things I know to be true