In TV commercials, action films and sports broadcasts, slow motion and time-lapse shots are increasingly being used to show details that are simply too fast for the human eye to follow in conventional viewing. No wonder that leading TV advertisers, directors and cameramen are constantly on the lookout for the latest recording techniques to surprise and delight viewers with images and sequences of hitherto unprecedented quality.

The new high-speed Camerobot is rapidly becoming a must-have accessory for this target group. It allows ultra-fast, high-precision camera movements that were not previously possible with existing technology. The robot is outstanding in terms of rigidity. Used in combination with the lightweight yet highly stable camera mount, Camerobot delivers perfect, vibration-free images and sequences in impressive quality.

Users benefit not only from the technical possibilities of Camerobot, but also from its ease of use. The high-speed robot can be conveniently controlled via a joystick or simply left to run in automatic mode. Programmed settings can be repeated as many times as desired in exactly the same configuration. Control of the robot in high-speed moves can also be effected by means of the target tracking option which enables the camera to automatically follow a subject as it goes through an extremely fast sequence.

In standard configuration, the six-axis robot can reach a height of 2.05 metres and operate across a range of 1.86 metres, which can be further extended using linear axes. Mounting adapters are available for all the leading high-speed cameras such as Phantom, Weisscam, Arri and Red Epic, enabling them to be used with this robust system. Other options, including a special software package for programming camera moves from a laptop, a precise zoom and focus control, a plinth and a transport box, form part of the system.

The newly unveiled high-speed version of Camerobot is a high-performance, all-inclusive system that offers film producers new freedom and possibilities in terms of special effects – there are no longer any technical limits to the creativity of their directors.

More freedom for dynamic and vivid camera moves in Norway’s modern news shows.
Norway’s television public broadcasting company NRK had been looking for a new opportunity to have a more dynamic camera picture for their daily news shows, that broadcast from the NRK studio 5 in Oslo. The goal was to have an automated solution that can be controlled in a comfortable way from the studio’s direction and that is able to perform highly precise moves with minimal programming effort. 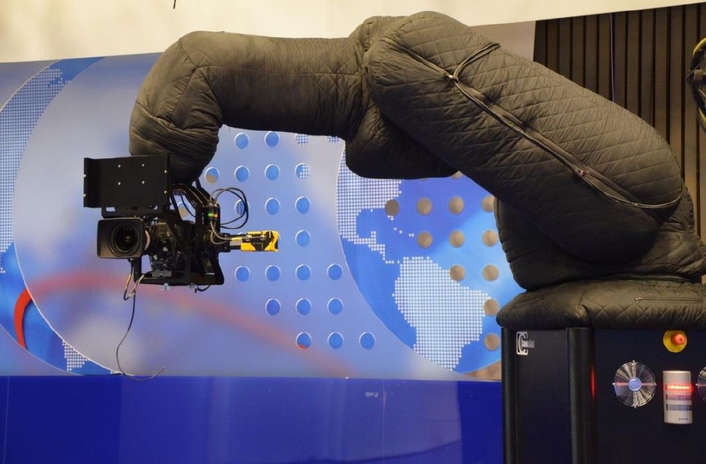 Together with Camerobot Systems, NRK found the solution to match their needs. The Camerobot for the NRK studio 5 has been integrated seamlessly into the existing studio automation architecture. With its high flexibility and workspace, the robot is more than capable of competing with the camera crane that has been replaced by the Camerobot system.

Camerobot solution:
Seamless integration for high flexibility
To have repeatable moves that can be recognized as a “trademark” for more dynamic news shots, the robot has been installed into the studio together with Camerobot Systems.

Because there are already automated pan-tilt units in the studio, it was necessary to fully integrate the system into the existing infrastructure. The robot can now be controlled by using the available Vinten Radamec joystick consoles that the operators are used to. To have further integration into the studio, an interface for MosART newscast automation system has been created that allows the user to trigger prior saved moves. The creation of these moves is easier than ever before by using the RoboKam Atelier Graphical User Interface that gives full control of the robot – saving positions, creating and improving moves and launching these moves can be done by using the intuitive GUI on a touch screen. Positions do not only relate to the robot’s 6 axis but also to the Canon lens with its focus and zoom – all is saved with one touch.

To gain the maximum flexibility the whole robot system can be moved with an air cushion system that allows the user to manually move the robot on its pedestal without a single scratch to the glass tiles underneath.

Camerobot, the most modern and effective solution in studio automation technology, will be used in the new Studio C at SWR Stuttgart, Germany.
This new studio robotic technology has a particular advantage. Because of the quality of the robot mechanics and the highly accurate sensors (absolute encoders) it is possible to determine the exact pose (position and orientation) in 0.05 mm of the camera CCD. The Camerobot system is connected to the VIZRT VR-graphic system and sends the tracking data in real time to the VIZRT system. An additional unique advantage of the robotic systems, is that exact repeatable movements are possible without any time-consuming re-calibration of the systems. 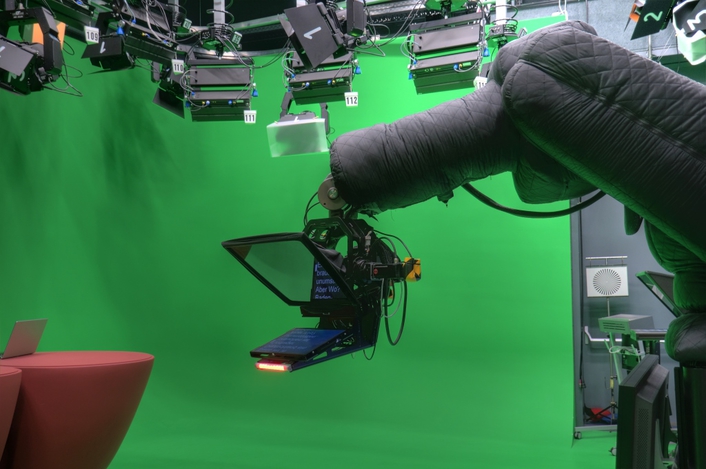 The new studio is fully automated. For the complete automation of the Camerobot system two systems are involved. The newsroom system OpenMedia from Annova and the newscast automation system from Aveco. 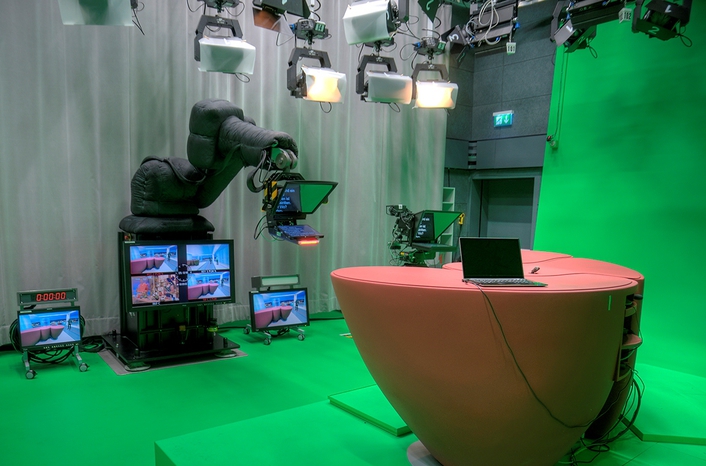 The manual control of the Camerobot system, for modifications and adjustment of shots and moves, will be made by the Vinten Radamec joystick control panel. In the studio the Camerobot is operating together with robotic pedestal from Vinten Radamec. To avoid collisions between these camera units a collision avoidance system is installed to overview the camera positions in the studio at all times.