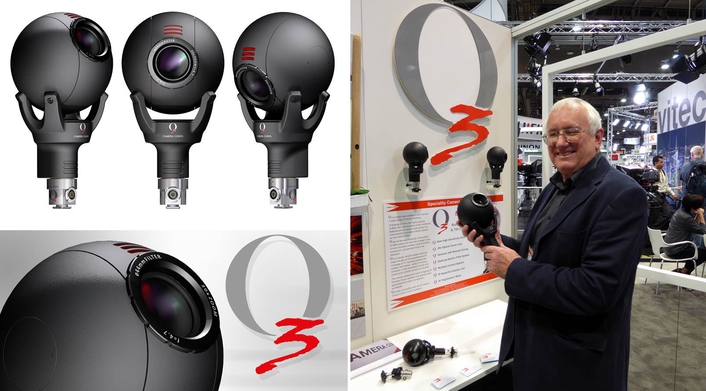 "Q-Ball gave television producers the freedom to place cameras literally anywhere, for daytime or infra-red-illuminated night operation, without having to risk the safety of camera operators or sending the crewing cost into the stratosphere," comments Camera Corps managing director Laurie Frost. "Up to 100 remote heads could be operated from a single panel. Q-Ball2 introduced the ability to store presets in non-volatile memory. Q3 adds a raft of refinements including twice the zoom range, a new high-performance imager with nearly double the sensitivity, ultra-smooth pan/tilt/zoom, the ability to intercut with studio cameras, and by popular request a cue light. Q3 can be controlled via a wide range of serial data formats including IP and our own audio-based data system."

"Q-Ball was easy to install, operate and de-rig, making it very popular for outside broadcasts, stage productions and reality shows as well as our own work at major international sports events such as the Olympics," adds technical director Jim Daniels. "Q3 takes that simplicity to a new level by allowing control data, genlock, power and return HD-SDI to be sent over a pair of single-mode fibers using an optional built-in fiber card. Q3 retains the compact spherical housing which made Q-Ball unobtrusive and therefore easy to place within view of other cameras. Q3 is just a few millimeters greater in diameter than the original DVD-sized Q-Ball. All commonly used HD formats are accommodated, interlaced and progressive, with up to 60 hertz frame rate plus quick. The format can be selected from the operator's control panel. An enhanced pan/tilt/zoom drive gives producers the freedom to match the precise acceleration and deceleration of much larger robotic heads when tracking moving performers on-air."

The Camera Corps Q3 can perform an unlimited number of 360 degree lateral rotations, 3 gigabits per second video being transferred over high-quality slip rings to ensure complete freedom from cable-snagging. Pan and tilt speed are adjustable from an ultra-slow 360 degrees in 90 minutes to 90 degrees per second. Motion control sequences of up to 25 seconds duration can be stored to internal non-volatile memory.

Q3 is compatible with all high-definition and intermediate-definition video formats currently in common use, including 1080 or 720 progressive or interlaced at 60, 50, 30, 25 or 24 frames per second. A concurrent PAL/NTSC output is available. Minimum illumination requirement is 0.5 lux (color mode) or 0.02 lux (monochrome). Camera alignment features include gamma correction, white balance, 16-step edge enhancement and a 2 second to 1/10,000 second shutter. A genlock input with user-adjustable sync timing offset is provided. The camera can be locked to external C sync or tri-level HD sync. An optional optical-interface provides data control, genlock and 3 gigabits per second video over a pair of single-mode fibers.