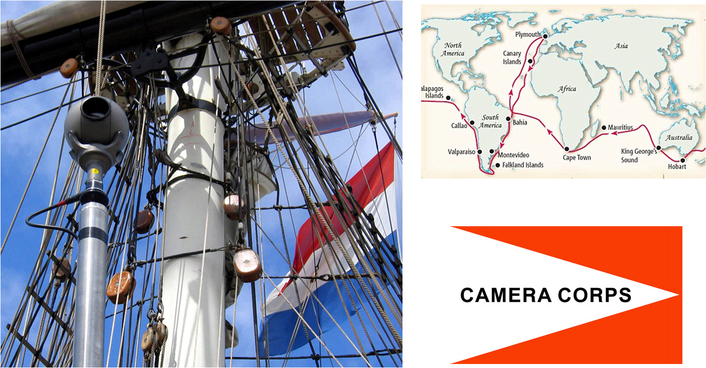 one of the five Camera Corps Q-Ball robotic HD minicam systems used aboard the Stad Amsterdam during VPRO's 'Beagle' project
Five Camera Corps Q-Ball robotic minicam systems have successfully completed one of the longest reality-television productions in the history of broadcasting. A nine-month voyage aboard a television reconstruction of Charles Darwin's voyage in HMS Beagle, the series was shot aboard the clipper Stad Amsterdam as it traced the course of Darwin's round-the-world journey. 'Beagle' was produced by Netherlands-based VPRO broadcast network and transmitted to audiences in Belgium and Holland as well as being globally viewable via the internet.

"The objective was to produce more than a thousand hours of reality television in 1080i HD," explains Ronald de Graaf who supervised engineering aspects of the voyage from its commencement in September 2009 to its completion in June 2010. "The Q-Balls simplified what would otherwise have been the very difficult task of capturing video efficiently from many angles and in all weather. Key discussion points were potential camera positions and the equipment's ability to tolerate salt water spray in conditions that at times exceeded storm force 10. All the supports were manufactured from stainless steel and needed to be easy to mount as we were not allowed to drill holes into the ship's masts or decking. Each Q-Ball consists of an HD camera and 10-to-1 zoom lens in a machined-aluminium sphere. The complete head is about the size of a DVD-diameter cannonball, though certainly not as heavy. We specified these to be in battleship blue finish so they remained unobtrusive when captured on screen. They proved easy to install, easy to use and delivered consistently excellent HD pictures in daylight or with infra-red lighting at night. One Q-Ball was mounted on the main deck, one at the forestay, one in the chart room and one on the mizzen mast. Our fifth Q-Ball was nominally a spare but proved a very useful auxiliary attached to an Egripment Genie Jib. The Q-Ball drive system accelerates and decelerates very smoothly, allowing pan and tilt to be adjusted while on-air. Would I recommend the Q-Balls for comparable future projects? Absolutely!"

"Each of the five Q-Balls was given a special hard anodised finish on the outside and inside surfaces," adds Camera Corps Technical Director Jim Daniels. "Stainless steel bearings inside each sphere ensured that the camera drives worked efficiently even in high levels of salt-water spray."

HD video from all four of the permanently-mounted Q-Balls was recorded 24 hours per day, seven days per week, to an Avid Airspeed from which content was selected and edited. The outputs from these Q-Balls were also sequentially switched and downconverted to a 175 kilobit/s Windows Media stream transmitted by satellite to VPRO's Hilversum headquarters as the basis of round-the-clock live web coverage throughout the entire duration of the voyage.

VPRO's 35-part series, 'Beagle', celebrated Charles Darwin's 200th birth year and the 150th anniversary of his publication of his book 'On the Origin of Species'. The project reconstructed Darwin's five-year long voyage which proved to be one of the most important journeys ever made in terms of its contribution to human knowledge. The Clipper Stad Amsterdam, is a three-mast sailing ship with advanced scientific measurement equipment, effectively a sailing science laboratory. The ship also has a built-in TV studio from which parts of the series were produced and broadcast. For additional background on VPRO's Beagle series, see