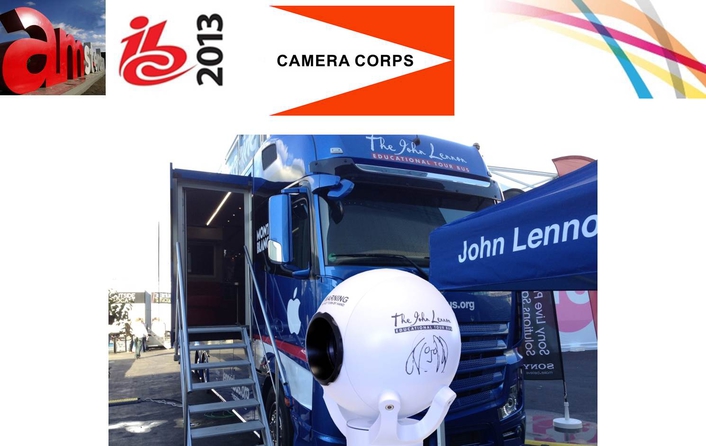 "The Lennon Bus is a great ambassador for the best in broadcast television and audio," comments Shaun Glanville, Business Development Director at Camera Corps. "The truck was the acknowledged gem of the entire IBC show, both as an example of a fully-equipped ultra-modern production studio and as a tool for educational outreach. Visitors were able to experience, discuss and operate the central elements of a very high-profile broadcast facility without the distraction and fatigue of trekking round a 14-hall trade exhibition."

"Robotic cameras have become an integral part of studio and on-location production, allowing images to be captured from a large number of viewpoints, including close-ups of remote events as well as very high angles. Q-Ball is very much plug-and-play. It is easy to mount, easy to conceal, easy to link and easy to operate. The best way to discover that is quite simply to use it or talk to the many television producers who now find it as essential as we do in our own work for broadcast-industry clients."

As well as being one of Europe’s highest-profile outreach projects, the John Lennon Educational Tour Bus is a unique vehicle designed and built by the Ketterer Truck Company, with studio integration provided by Sony Professional Solutions Europe. It incorporates two studio environments, robotic video cameras, switchable glass doors that change from clear to opaque for privacy, green-screen production capabilities, and an upper level deck for interviews, live and recorded music.

Formally dedicated by Yoko Ono on May 8 at the Museum of Liverpool, the Lennon Bus includes a Q-Ball system with a white pan/tilt/zoom camera head, a Camera Corps triple-axis Mini Joystick Remote Control Panel, interface and connecting cable. The head itself is etched with the John Lennon logo.

Like its sister vehicle in the US, the Lennon Bus is staffed by a crew of three producer/engineers. Its schedule encompasses stops at local schools, colleges and festivals, providing free tours and workshops in which young people produce original songs, audio recordings, broadcast quality music videos and live streamed events.

Developed and produced by Camera Corps both for rental and for sale, the Q-Ball has delivered close-up video from many very high-profile broadcast events in recent years, including the BBC Proms, Summer and Winter Olympics, international football, motor racing, water sports, tennis, football and rugby. Housed in a robust and weatherproof cast-aluminum sphere of similar diameter to a standard Compact Disc or DVD, the Q-Ball head comprises a 1080i camera with 10:1 zoom optics plus a fully rotatable pan and tilt head. High-precision motors enable the operator to adjust the camera angle from practically any location, including smooth adjustment of vertical and lateral tracking speeds.

A Vitec Group company, Camera Corps specializes in providing high-volume support services for reality television programs as well as very large-scale sports and stage events worldwide. Based on the site of the former Brooklands motor-racing circuit near London’s Heathrow airport, Camera Corps has achieved a pre-eminent reputation for its ability to acquire exciting and unusual television content from exceptionally challenging environments.

The John Lennon Education...ad in the U.S. and Europe
Neutrik® Celebrates the ...al Tour Bus in Liverpool
Sony set to support The J...nnon Educational Tour Bus