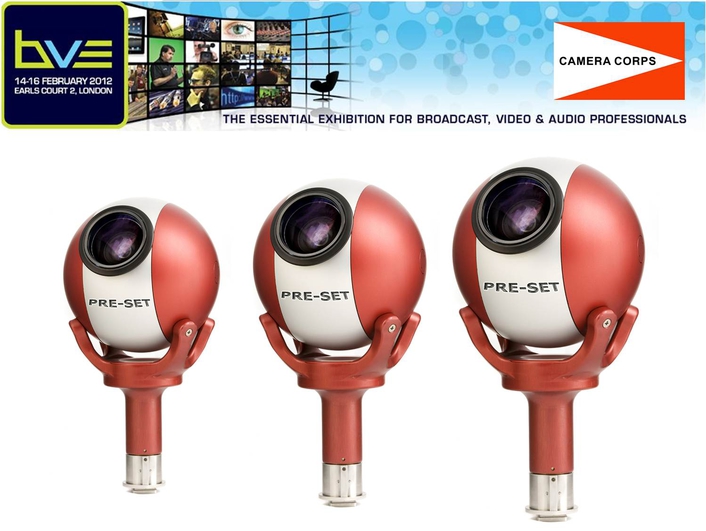 Shown at IBC2011 and now in full production, Q-Ball Pre-Set was developed in response to demand from clients who want to be able to store and rapidly recall pan, tilt, zoom and focus data.

“Q-Ball robotic camera systems are being used increasingly to capture content that would be impossible to deliver in any other way,” comments Camera Corps Technical Director Jim Daniels. “Fully compatible with our PTZF switcher and joystick control unit, each Q-Ball Pre-Set can store up to 18 system configurations, enabling an operator to switch the head quickly from one to setting to another. The stored parameters are held in non-volatile RAM within the head and therefore retained even after a system is powered down between sessions.”

Q-Ball and Q-Ball Pre-Set are part of a complete system which includes the CC-3D Universal RCP and the Optical Fibre Link, both of which were exhibited in prototype at BVE 2011 and are now in production.

When used for 2D content acquisition, the CC-3D Universal RCP allows six cameras of different makes and models and to be comprehensively remote controlled from a single panel. For 3D applications, up to two stereoscopic rigs can be controlled on a paired-camera basis to maintain predetermined adjustment offsets between left and right cameras (or as individual cameras if preferred). The panel is intuitive to operate, allowing fast and easy operation during outside broadcasts as well as for live stage or studio events.

The Optical Fibre Link allows Camera Corps remote heads to be operated over much longer distances than traditional copper cable. HD/SD-SDI is carried from the camera to the control position. A reverse direction feed sends data from the controller to the camera. Control data is encoded onto an audio carrier using the proven technology deployed across Camera Corps’ entire range of remote camera control systems.