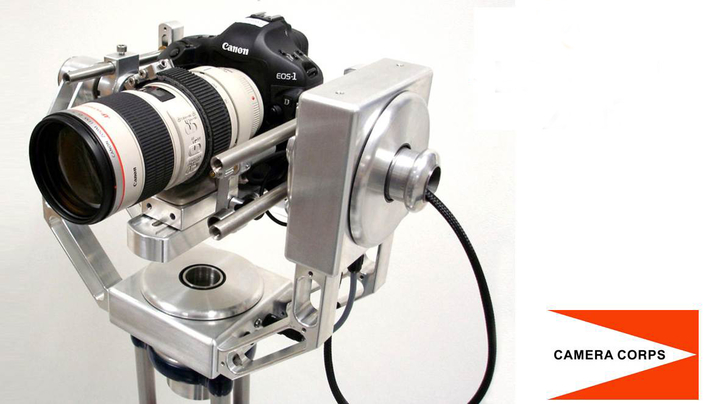 Pan, tilt, zoom, pre-shoot and trigger can all be performed using a compact panel with a responsive joystick and pushbutton controller allowing fast and easy. Images can be viewed at any time during the creative process via a standard Ethernet or USB link from the camera to a desktop or laptop computer.

"The DS-1 Digital Stills Head was developed as a no-compromise remote control system, initially for coverage of the summer 2012 sports events in and around London," states Camera Corps founder and Managing Director Laurie Frost. “Photographers from Getty, Reuters and Associated Press are currently using the DS-1 to capture images with a greater degree of creative freedom than we have seen in press coverage before. The head offers professional photographers many of the features we pioneered in 1990 for the cinema industry when we introduced the Academy-Award-winning Hot Head, followed in recent years by advanced remote camera control systems for television. Like all our products, it is designed to the very exacting standards we require for our own work in covering live events such as news, sports, music and theatre."

The DS-1 is strongly built and weatherproof so can be mounted in practically any location, including overhead positions that might otherwise be impractical or dangerous. Photographers gain the option of getting much closer to the action than is usually possible at live events without causing distraction to anyone else. This mode of operation also offers huge advantage in terms of productivity as it allows a single photographer to capture images from two or more places at once by controlling DS-1 in multiple locations.

"The control panel is extremely easy to set up and operate,”  details Camera Corps Technical Director Jim Daniels. "The head and controller are powered by 12 volt direct-current or a universal mains adapter. A tilt clamp allows easy adjustment of the camera's initial vertical angle. Zoom motor and gear are mounted on an adjustable arm to allow for different diameters of optical zoom. The lens is driven via a flexible toothed gear rack. When the system is first powered, internal logic measures the centre position of the control joystick and sets this as the zero point. Two large pushbuttons positioned below the joystick trigger pre-shutter and the actual shot."

About Camera Corps
Based on the site of the former Brooklands motor-racing track near London’s Heathrow airport, Camera Corps (part of Vitec Videocom, a Vitec Group company) specialises in providing high-volume support services for reality television programmes as well as very large-scale sports and stage events. Camera Corps has achieved a pre-eminent reputation for its ability to acquire exciting and unusual television content from exceptionally challenging environments.