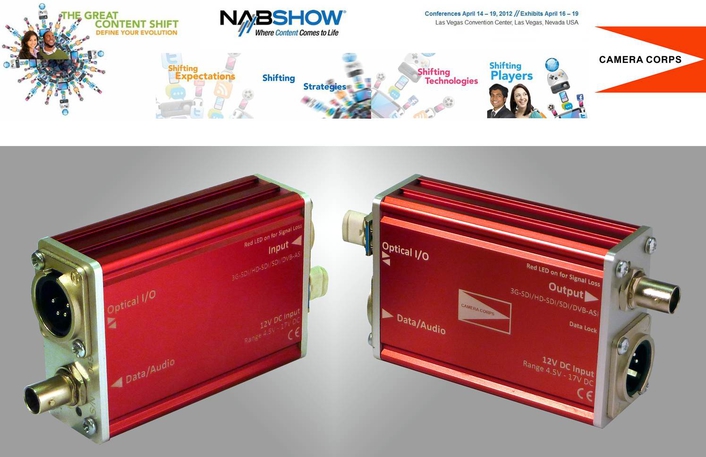 Camera Corps to introduce BC550 compact 3G-capable fiber-optic link
Camera Corps, the world leader in providing robotic camera systems and supporting services for live television and coverage of major sports events, will introduce the BC550 compact fiber-optic link to the US market at NAB 2012 in Las Vegas, 16-19 April. Shown in prototype at IBC 2011 and now in production, the BC550 is designed for use with remote camera heads such as the Q-Ball and Q-Ball Pre-Set.

“The BC550 was developed to meet the needs of our own outside broadcast service operations,” comments Camera Corps Managing Director Laurie Frost. “We anticipate considerable demand from the rapidly increasing number of people owning or renting Q-Ball systems. Optical fiber allows very robust signal delivery over much greater distances than copper cable and is ideal for 1080i and 1080p feeds.”

The Camera Corps BC550 fiber-optic link consists of separate transmitter and receiver modules, each housed in an impact-resistant and weatherproof metal case. Dual-fiber carries HD/SD-SDI from the camera to the control position plus a reverse direction channel which communicates data from the controller to the camera. Control data is encoded onto an audio carrier using the proven technology deployed across Camera Corps’ entire range of remote camera control systems.

Compact-form-factor LC connectors allow fast attachment of dual single-mode optical fibers to the link. Power can be sourced from the same 12 volt supply as the Q-Ball remote pan/tilt/zoom camera. Equalization and reclocking within the integral video processor permit long cables to be used between the transmitter and receiver. A red LED warning light on the front panel illuminates in the event of signal loss. Video output is via a standard 75 ohm BNC connector.

The BC550Rx receiver module has a high impedance data input port allowing multiple BC550Tx transmitters to feed it in parallel. Five interface boxes can be fed from a single fiber receiver. XLR link and XLR4 splitter cables are available for use with the Q-Ball interface.

Based on the site of the former Brooklands motor-racing track near London’s Heathrow airport, Camera Corps specializes in providing high-volume support services for reality television programs as well as very large-scale sports and stage events. The company has achieved a pre-eminent reputation for its ability to acquire exciting and unusual television content from exceptionally challenging environments. The Camera Corps team expands during large-scale events from 16 staff to as many as 200 specialists, including professional climbers who are very experienced at rigging camera systems at height in almost any location.