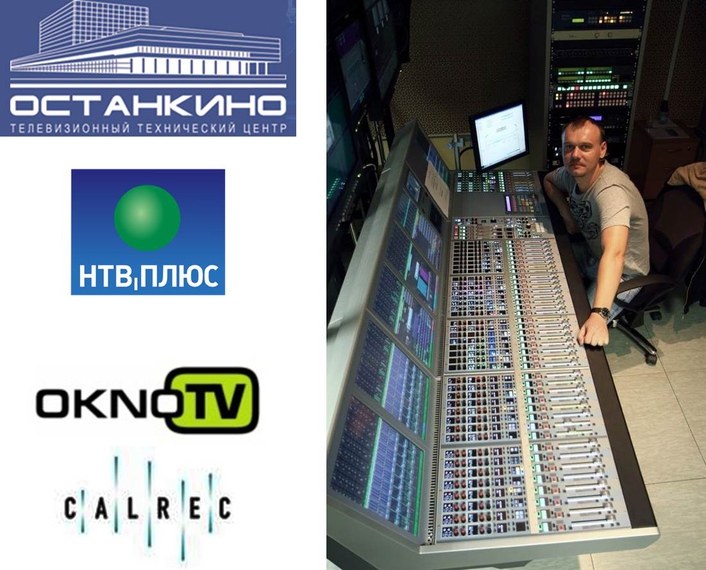 The project was coordinated through OKNO-TV, one of Calrec's preferred Russian systems integrators
Calrec today announced its first foray into Russia with the sale of two Artemis Beam consoles to Television Technical Centre Ostankino for NTV-PLUS, a Russian subscriber satellite service broadcasting sports, news, movies, documentaries, and children's TV, as well as an HD service. The 48-fader desks were installed in the Moscow Television Technical Centre and were used by NTV-PLUS for the Wimbledon tennis tournament in London this year.

The Artemis Beam consoles have been networked together using Calrec's Hydra2 system in order to maximize flexibility, allowing either console to access any I/O on the network. The nature of the Hydra2 network provides plenty of room for future expansion, making it simple to add additional consoles and I/O.

The new system enables NTV-PLUS to broadcast in 5.1 and move content around with ease. In doing so, NTV-PLUS can maximize productivity and realize larger, more complex productions, which in turn could lead to more revenue.

As one of the few console manufacturers to offer tailored solutions to broadcasting companies, Calrec designed a panel that sits in the control surface and houses a Colin Broad SR4 serial remote/synchronizer. This setup enables operators to control multiple playback/record machines from the Artemis desk.

"We aspired to find a system to match the requirements of our broadcasting and production facilities," said Oleg Kolesnikov, CTO at NTV-PLUS. "We believe this choice offers the best answer for live sports productions and studio shows. NTV-PLUS is widely known as a technologically pioneering company in the Russian broadcast market, and this digital audio transition with Calrec allows us to maintain that position."

The project was coordinated through OKNO-TV, one of Calrec's preferred Russian systems integrators.

NTV-PLUS also rented three more Artemis consoles for use during the Summer Games in London.

"We are thrilled about our first sale to the prominent Russian station, NTV-PLUS," said Mike Reddick, Calrec's manager of European sales. "We feel it is a very positive first step in forging strong bonds between our companies in what will be a long and mutually beneficial relationship. Calrec offers a solution for today's broadcaster that allows room for change and expansion, which is especially poignant for a forward-thinking television company such as NTV-PLUS."

About NTV-PLUS Satellite Broadcasting Company
NTV-PLUS is the first Russian satellite broadcasting company. It has held a leading position in Russian pay-television for more than 15 years. NTV-PLUS broadcasts throughout Russia and Ukraine. The company aims to produce high-quality television for the whole family.
More than 2 million people watch NTV-PLUS channels. NTV-PLUS retransmits Russian and foreign channels, as well as its own produced channels. More than 180 channels are available for NTV-PLUS subscribers, including high-definition channels (HDTV) and 3D.
NTV-PLUS sets the standards of modern digital TV. NTV-PLUS television content is unique in Russia. To date NTV-PLUS Satellite Broadcasting Company produces 12 sport channels, 10 movie channels, the "NTV-PLUS 3D by Panasonic" channel, and "Zakon TV" channel.