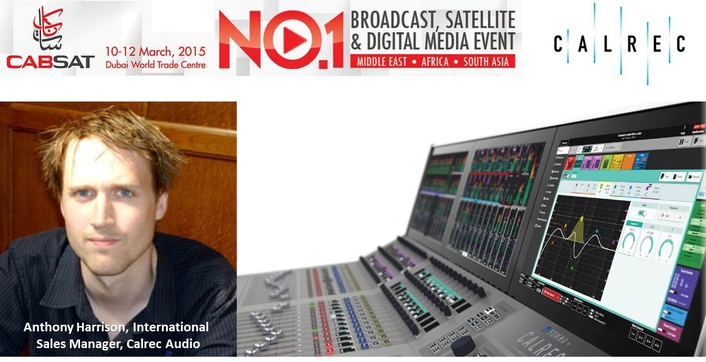 .
"CABSAT gives us an important opportunity to meet with our customers, operators, and partners in the Middle Eastern, African, and South Asian markets. Our ability to provide a product that exceeds broadcasters' requirements is a direct result of listening to those who use it. CABSAT is the perfect forum for meeting those people and strengthening those relationships." — Anthony Harrison, International Sales Manager, Calrec Audio

NEW Modular MADI Interface
Visitors to CABSAT 2015 will see Calrec's new MADI interface card for its 3U modular Hydra2 I/O box. The card offers a MADI stream input and output via BNC or SFP fiber, with the ability to stream simultaneously from all outputs.

NEW Dante Interface
Also on show at CABSAT 2015 is Calrec's Dante interface, which works in conjunction with Calrec's Hydra2 I/O across the entire range of Calrec Bluefin2 consoles.

The development gives Dante connectivity to every client on a Hydra2 network via a simple, single-width 3U interface card. This provides 64 audio input and 64 audio output channels, with connectivity via dual-redundant RJ45 Ethernet connectors on the card's front panel.

Dante is a proprietary networking technology developed by Audinate and is currently deployed across the globe to interconnect many different kinds of pro-audio equipment.

Company Overview:
Calrec Audio is exclusively dedicated to excellence in audio mixing for on-air and live production. A broadcast specialist for 50 years, Calrec has developed a range of digital consoles relied on by the world's most successful broadcasters. For putting sound in the picture, broadcasters put their trust in Calrec.