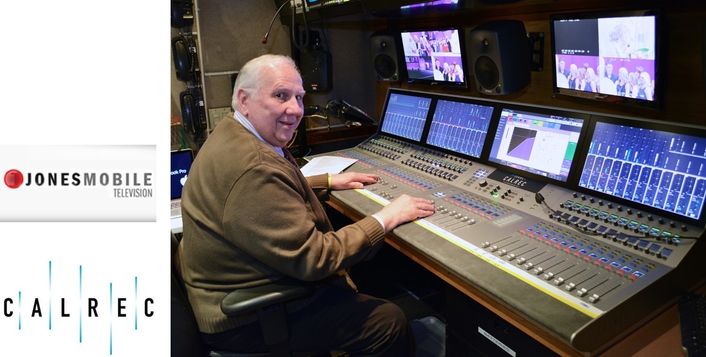 "When our engineers first laid eyes on the Summa, they couldn't believe such a compact desk could be robust enough to support a high-powered live HD production. But one show was all it took to win them over," said Bob Derryberry, co-owner, Jones Mobile Television. "Space was always going to be an issue in VisionHD, but Calrec has given us the perfect solution with the Summa, a smaller-footprint desk that offers huge power and functionality.

"With its 5.1 capabilities, the Summa has opened up a new world of business for our company; in fact, a client looking to do 5.1 shows contracted us knowing that we would be installing the Summa in the early summer. It's just the first example of how we're now in the running for a much broader range of productions."

VisionHD is a 51-foot expando trailer used to produce and broadcast a wide range of national sports, corporate, and entertainment events. The Summa console was first used for coverage of the Copa America soccer semifinal and quarterfinal matches in Houston.

Chris Duty, engineer-in-charge at Jones Mobile Television, commented: "The Calrec Summa works beautifully and gives us many more capabilities than we had previously. The Hydra2 router allows us to interface directly with digital devices on the truck, and we can use our core video router side by side with the Summa for even greater power and more I/O.

"We're able to provide much more complex configurations of the truck's equipment, which we can now change per show. The console's analogue and digital interfaces, in particular MADI, have made it a lot easier to take advantage of all of Calrec's industrial-strength routing functionality.

"It's easy to see why Calrec is known as the gold standard for audio mixing in TV production trucks and studios. The beauty of the Summa is that it can handle productions of virtually every complexity, in an impressively small form factor."
The Summa supports 128 channels with full redundancy, and Calrec's exclusive Bluefin2 FPGA technology, designed at the outset for surround operation, gives Jones Mobile comprehensive 5.1 mixing capabilities.

"Summa is the ideal choice for regional broadcasters and OB providers in this sector of the truck market," said Richard Phillips, regional sales manager, Calrec Audio. "Jones Mobile is a great example of a leading-edge provider in this space that is taking its business to the next level with Calrec."