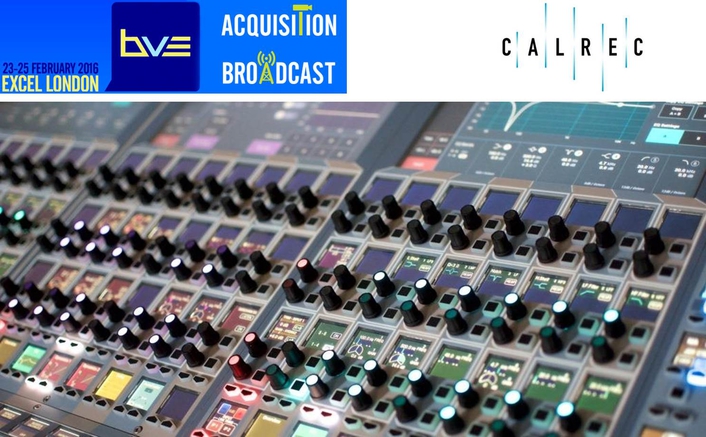 "We always look forward to BVE. It's a very important forum for us to demonstrate our newest innovations to a local audience, and it's also a great opportunity for us to have relaxed, meaningful interaction with our customers and partners." — Jim Green, International Sales Manager, Calrec Audio

New features include send levels on faders that allow the user to change the path level indicators on the fader to aux send level, admin-level protection of bus widths that are stored in the show memory for quick and easy changes, and meter highlighting when a fader is touched.

V4.0 is available for all consoles with the Concord processor upgrade. With this hardware upgrade, Calrec made significant performance improvements in order to facilitate the many new features.

Waves SoundGrid® Integration
At BVE 2016, Calrec Audio will showcase an integrated Waves SoundGrid® solution for its Hydra2 platform of consoles. This powerful integration is unique amongst broadcast desks in that it uses a brand-new SoundGrid interface module on Calrec's Hydra2 network. The module provides a direct connection between Hydra2 and the Waves SoundGrid network, allowing simple integration and introducing fewer parts into the chain for lower latency and greater reliability.

Calrec customers can control Waves software, such as MultiRack, from the integrated touch display in Apollo and Artemis surfaces, which allows direct control of Waves plugins from the mix position. This capability gives Calrec users instant access to the vast range of highly regarded Waves plugins and powerful broadcast tools, such as the new UM225/226 stereo-to-surround upmixers, WNS noise reduction tools, and a wide variety of creative processors.

Thanks to a direct Hydra2 connection, all Calrec/SoundGrid I/Os benefit from the powerful Hydra2 feature set, which includes source and destination protection, Hydra Patchbays, aliases, access rights, and the inherent redundancy of the Hydra2 network.

Company Overview:
Calrec Audio is exclusively dedicated to excellence in audio mixing for on-air and live production.
A broadcast specialist for 50 years, Calrec has developed a range of digital consoles relied on by the world's most successful broadcasters.
For putting sound in the picture, broadcasters put their trust in Calrec.