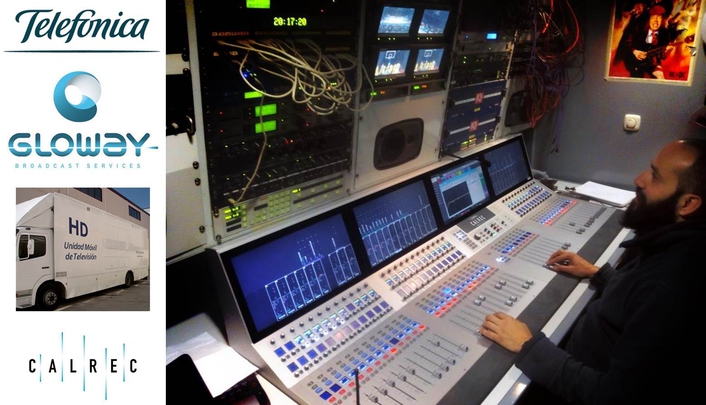 Spain's Telefonica Broadcast Services has upgraded its HD OB truck with a Calrec Summa console, making it one of the only companies in the Spanish OB market to offer a broadcast-specific audio console.

"We produce events for almost all major broadcasters in Spain, as well as foreign companies. Today it's a soccer game. Tomorrow it will be basketball. After that we might broadcast an opera. We have to be able to manage any setup our clients require and guarantee their big productions will go to air with no problems," said Luis Garcia Colombo, Telefonica OB audio engineer.

"The Summa ensures we can do it in a way that only a broadcast-grade desk can. We don't even have to think about whether we'll be able to handle the setup; we simply know that we can. It's easy to see that it's not just an audio console, but a TV audio console, and that gives us an edge in the market."

The Summa's technology and functionality make it possible for Telefonica to handle larger TV productions than ever before and put the company in a better competitive position. Summa's feature list — such as 128 channels, four mains, 32 tracks, an oscillator, the number and variety of inputs and outputs, and the Hydra2 networking infrastructure — boosts the quality of Telefonica's HD OB truck and reduces setup time between productions.

Telefonica primarily covers sports and Champions League football in Spain. Calrec's Soccer Sidekick iPad® app, an assistive mixing tool that simplifies the job of tracking on-pitch audio during a football game, is especially useful. The operator uses the app to help calculate the optimal mic/fader configuration at any given moment, which makes it possible to capture important on-pitch events while minimizing the amount of crowd and venue noise.

"There are not many broadcast-specific desks in the Spanish OB market, so installing a Summa is a big step forward," said Jim Green, Calrec's international sales manager. "Telefonica is making a bold statement to the broadcast marketplace about its commitment to improving quality and output."

About Calrec Audio Ltd.
Calrec Audio is exclusively dedicated to excellence in audio mixing for on-air and live production.
A broadcast specialist for 50 years, Calrec has developed a range of digital consoles relied on by the world's most successful broadcasters.