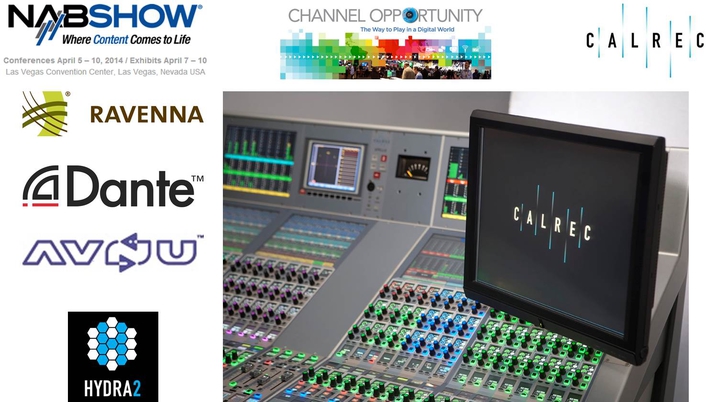 Visit Calrec at the NAB 2014 Show, Booth C1746
Calrec Audio has committed support to AoIP networking by announcing its membership in the RAVENNA community by entering into a partnership agreement with ALC NetworX, the company behind RAVENNA. The announcement demonstrates Calrec's commitment to developing RAVENNA- and AES67-compatible AoIP interfaces for its range of audio consoles through the Hydra2 network.

"MADI continues to serve the industry extremely well, but we expect to see AoIP interconnections providing a more flexible and elegant replacement in the near future. AoIP offers greater capacity, flexibility, and multicast possibilities, all on an infrastructure shared with other services," said Patrick Warrington, technical director of Calrec Audio.

"The excellent work by the AES's X192 committee in its publication of AES67, the AoIP interoperation standard, has given the AoIP project a huge boost," added Warrington. "Now manufacturers can design interfaces that they are confident will work with other manufacturers' equipment. ALC NetworX's involvement in drafting AES67 means RAVENNA interfaces will be directly compatible with other AES67-compatible equipment.

"While non-proprietary AoIP solutions are commonly not able to offer the low latency, determinism, capacity, and broadcast feature-rich audio networking that Calrec's Hydra2 provides, we think that AES67 and its compatible brethren are a perfect companion technology for wider connectivity to third-party equipment in a broadcast facility. RAVENNA, with its open technology approach and scalable performance capabilities, is a perfect way to implement a powerful and flexible gateway between Hydra2's unsurpassed performance and AES67's broader connectivity."

Calrec is also announcing the development of Audinate's Dante AoIP network interface, available later this year, which will provide 64 inputs and outputs to the Hydra2 network on a Gigabit interface.

"To best meet the needs of our wide range of customers, it is important for commercial manufacturers such as Calrec to maintain an agnostic approach to IP interfacing," said Warrington. "Although more commonly found in the pro-audio and installation markets, Audinate is ahead of the game in that it has a complete networking solution, and some of our customers are seeing applications for Dante in their broadcast environments."

Calrec also remains committed to the development of an AVB (Ethernet over IP) interface, announced last year. The company sees the benefits and applications of AoIP solutions and Ethernet-based AVB proceeding on separate tracks, with distinct applications for both technologies.