The project was commissioned to replace a previous eight-camera OB truck in use across Eastern Africa, with the installation of equipment from two existing broadcast vehicles, combined to make a single and better functioning 14-camera unit.

With complex, custom-designed coachwork included in the contract C2S Systems has completed the entire project in-house, from vehicle supply through to commission and acceptance. A second stage of work on the truck will commence later in the year, when it will have its full complement of equipment installed, bringing it to its full capability and making it one of the most powerful OB’s of it’s kind in Eastern Africa.

The C2S Systems team completed the coachwork in late 2012, and the design, new equipment sourcing, integration and testing began in January 2013 taking just 12 weeks from order to commissioning.

The Mercedes Axor 26T rigid chassis truck was built as a double-expander to provide space, and the bodywork was designed to accommodate a large amount of equipment. State-of-the-art mechanics and hydraulics were used in the vehicle, allowing expansion of the OB truck and simple and efficient rigging by the production team with the push of a button.

The truck was fitted with Sony PVM-1741 monitors, Tektronix WFM-5000 Waveform monitors, and a C2S Systems designed touch screen router control. Features were included in the design to enable technical support to be provided remotely, giving the vehicle a level of technical surety while on location.

The vehicle will be based in Nairobi and used for broadcasting sports events across Eastern Africa, particularly league football. 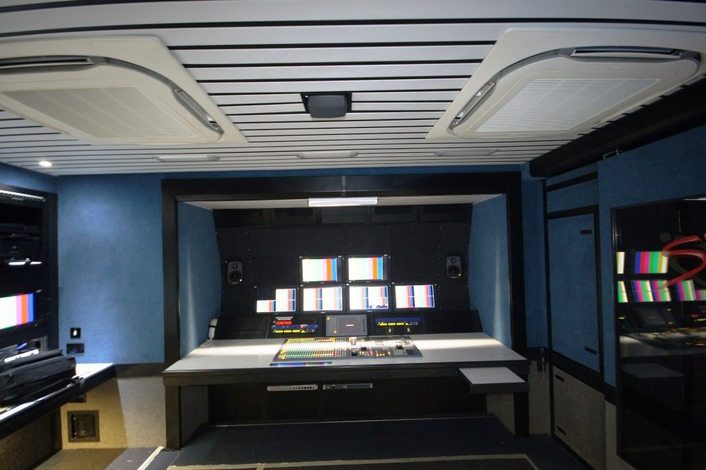 Jonathan Lyth, Systems manager at C2S Systems commented, “We were keen to show off our mechanical engineering and coachwork ability on this project, as it was the first bodywork project we’ve done for SuperSport and we obviously wanted to impress. The seamless mechanics and smooth operation of the mechanical rigging, with the power of the hydraulics, gives the truck extra wow-factor – these elements allowed us to prove the team’s ingenuity and attention to detail.

Lyth continued: “Using equipment from other systems posed it’s own challenges in the system design. We knew the truck needed to be ready for an upgrade in only a few months time, so we built a system that would allow that to happen with minimal disruption, and also fitted the truck with an HD-ready system so that all additional equipment could simply slot into place. Making things seem easy can be surprisingly complex.”

Andre Venter, Head, SuperSport Africa commented: “We knew this project could be challenging, especially with such a tight time-scale, but C2S Systems have always been able to meet our needs, so we had every confidence and the result is a very impressive truck. The OB was covering the live Cricket in Zimbabwe only hours after the C2S team had finished final commissioning on-site. When C2S Systems finalises the vehicle it will be the most powerful OB truck of it’s kind in Eastern Africa, which makes us very proud.”