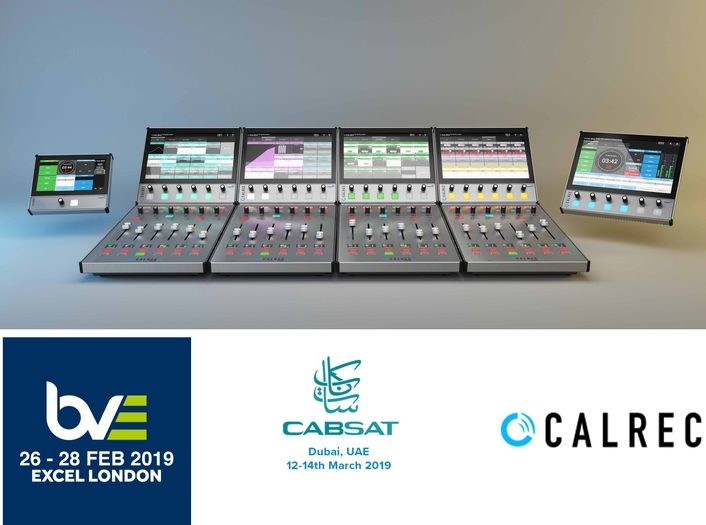 Calrec Audio is exclusively dedicated to excellence in audio mixing for on-air and live production. A broadcast specialist for more than 50 years, Calrec has developed a range of digital consoles relied on by the world's most successful broadcasters. Increasingly consoles are integral components on facility-wide networks, giving rise to adaptable workflows, shareable resources and the ability to be easily expanded. From the very beginning, Calrec has created innovative solutions that have allowed broadcasters to develop their working methods and get greater value from their equipment. For premium audio solutions, broadcasters put their trust in Calrec.

Calrec is showing its Type R modular, expandable, IP-based radio system for the first time at CABSAT. Type R makes use of standard networking technology and combines it with configurable soft panels that can be tailored to operator needs. Type R’s physical control system consists of three slimline panels: a fader panel, a large soft panel and a small soft panel. Each is compatible with COTS hardware and powered over Ethernet to keep cabling to a minimum.

At the heart of Type R is a simple 2U core with integrated I/O resources to get customers up and running immediately. A single core can power up to three independent mixing environments, with no sharing of DSP resources. Whether used as independent studio consoles, microphone processors or utility mixing, the ability to use multiple mixing engines combined with the flexibility of an AES67 compatible network provides enough flexibility to keep pace with radio’s changing requirements.

Also making its BVE debut is ImPulse core, the next generation audio processing platform. The ImPulse core is a powerful audio processing and routing engine with AES67 and SMPTE 2110 connectivity. It is compatible with existing Apollo and Artemis control surfaces, providing a simple upgrade path for existing Calrec customers.

ImPulse core provides 3D immersive path widths and panning for NGA (next generation audio) applications, 5.1, 5.1.2, 5.1.4, 7.1, 7.1.2 and 7.1.4 input channels, busses, monitoring and metering are available. Height and 3D pan controls are provided, and paths of all widths can co-exist within a mix and be routed to/from each other with flexible panning and downmixing built in.

Calrec’s compact, high power Brio consoles are designed with versatility in mind to work across all different broadcast applications for everything from live sports to news and light entertainment. The Brio36 includes an impressive range of on board I/O so it’s operational straight out of the box. It also has full Hydra2 network compatibility and a sensitive price point that doesn’t reflect the full and rich broadcast feature set. Calrec is supported at BVE 2019 by UK Brio partner Synthax Audio.

Both the Brio36 and the Brio12 recently got an upgrade in channel count. Brio DSP expansion packs are now available, bringing the Brio12 up from 48 to 64 input channels and the Brio36 from 64 to 96 input channels. DSP expansion packs are available for all Brio consoles on v1.1.6 version software or above; software versions are available for free following Brio registration at www.calrec.com/brioregistration.

Artemis is a compact, powerful audio console that’s widely deployed across the broadcast spectrum. It uses the same Bluefin2 and Hydra2 technologies as its larger counterpart, the Apollo. Artemis is available in four sizes: Shine, Ray, Beam and Light. Bluefin2 gives Artemis Shine 680 channel processing paths, 456 on the Artemis Ray, 340 on an Artemis Beam and 240 on an Artemis Light, with up to 128 program busses, 64 IFB/Track outputs and 32 auxiliaries.