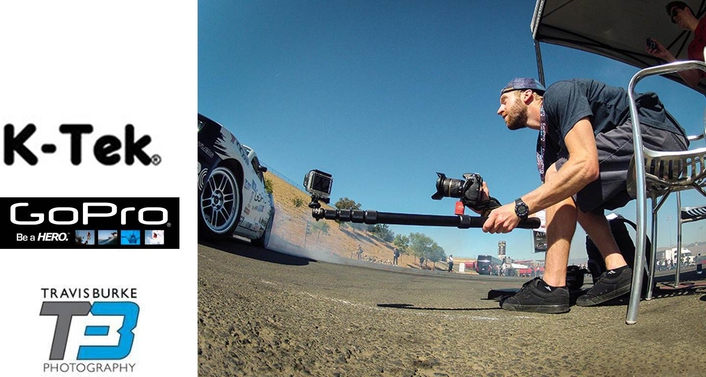 .
Travis Burke is an outdoor and adventure photographer who yearns for point-of-view shots that are almost impossible to get. “I shoot action and adventure photography, everything from base jumpers, rock climbers, race cars, surfers, skateboarders, snowboarders, pretty much anything outdoors,” he said. “I specialize in shooting things that are either action or adventure related.”Though he uses a fully outfitted, zoom lens equipped DSLR for many of his shots, his signature images are those that leave the viewer wondering “how did he do that?”

One key to his exciting point-of-view shots is the GoPro range of nearly indestructible high definition cameras. But with a camera as tiny as GoPro he had to figure out how to get it in the right position, pointed in the right direction. Burke had shopped around for years for an accessory to position the GoPro in unusual angles, and closer to the action. Then he found the K-Tek Tadpoles. “When I finally found it, it was like, wow, this is basically better than anything I had dreamed of or had tried to design myself. They really went the extra step to make sure it had everything needed, and was still the high quality that I had imagined.”

What kind of shots does Burke say the Tadpoles let him get? “Anything from holding it outside of a car going down the freeway, to hanging it over a cliff to get pictures of base jumpers jumping off, reaching out to get closer to rock climbers so you can see their faces, and even to get shots of myself. When I’m out photographing is not just about other athletes, but I like to also show the things that I’m out there shooting. I’ll be mountain biking, skateboarding and snowboarding along with the guys. Tadpoles let me shoot the others, but also, because it has an adjustable ball head on the top of the pole, I can turn the camera whichever way I want, even pointed back at me.”

The K-Tek Tadpoles attach to Burke’s GoPro cameras via a standard quarter-20 threaded screw, and the gimbal head at the end of the Tadpole allows him to easily position the GoPro at any orientation. “You move it and spin it and turn it in any direction you want, and then with a quick tighten of one knob, it will tighten to any position you’ve put it in.”

For all of his extreme-angle shots, in difficult environments, it’s important for Burke to be able to keep a hold on the Tadpole-mounted GoPro. “It’s really easy to grip and to hang on to, even when you’re in a precarious position. With just one hand, you can still hold it and have it fully extended, and still feel safe that it’s not going to slip out of your hands.”

Travis Burke shoots for Grind TV, and contributes material to GoPro and is a beta tester of upcoming generations of GoPro’s HERO cameras.