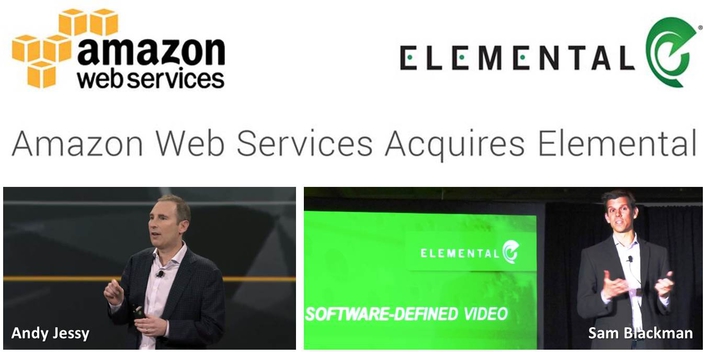 Amazon Web Services, Inc. (AWS), an Amazon company, today announced that Amazon has reached an agreement to acquire Elemental Technologies, Inc., pioneers in software-defined video solutions for multiscreen content delivery. The acquisition brings together Elemental’s leading video solutions with the AWS Cloud platform to provide media and entertainment companies with a range of integrated solutions to efficiently and economically scale video infrastructures as the media industry increasingly moves to internet based delivery.

Elemental software makes it easy for media and entertainment companies to take live and on-demand video destined for traditional networks like cable, satellite, or over-the-air broadcast and re-format that content for distribution to PCs, smart phones, tablets, and TVs.  Elemental has more than 700 media franchise customers and powers some of the world’s most popular over-the-top TV (OTT) applications, like the BBC’s iPlayer, CNNGo, ESPN ScoreCenter, HBO GO, MSNBC Shift, and Sky Go and Sky Now.  Additionally, Elemental is supporting the world’s first 4K Ultra HD services including those that were delivered by the BBC during the 2014 World Cup.

“Elemental shares Amazon’s passion for invention and putting the customer first,” said Andy Jassy, Senior Vice President of Amazon Web Services. “Together, we’ll collaborate on deeper technology integrations and new infrastructure offerings so that media and entertainment companies can evolve their hybrid and cloud models as they continue to innovate their services for viewers.”

Founded in 2006 and headquartered in Portland, Oregon, Elemental will continue to operate its business under its existing brand, delivering the full range of solutions for pay TV operators, content programmers, broadcasters, governments, and enterprise customers. Elemental will also expand the integration of its offerings with AWS, and through close collaboration with AWS, accelerate the innovation of next-generation services that feature a range of solutions for customers leveraging on-premises assets, hybrid architectures, and cloud.

“The media and entertainment industry is at a unique inflection point, and as a part of Amazon, we will be in an even stronger position to help our customers delight their viewers globally,” said Sam Blackman, co-founder and CEO of Elemental. “We’re thrilled to have Amazon supporting our growth and ongoing commitment to our customers’ success.”

Terms of the acquisition were not disclosed and are subject to closing conditions. The acquisition is expected to close in the fourth quarter of 2015.

About Elemental
Elemental Technologies is the leading supplier of software-defined video solutions for multiscreen content delivery. Founded in 2006 and headquartered in Portland, Oregon, the company pioneered the use of software-based video processing to distribute video over IP networks. Solutions from Elemental provide the flexibility, scalability and performance required to deliver high quality video via turnkey, cloud-based and virtualized deployment models. Powering video experiences for more than 700 leading media franchises worldwide, Elemental helps pay TV operators, content programmers, broadcasters and enterprise customers bring video to any screen, anytime – all at once. The company has offices in the United States, the United Kingdom, France, Hong Kong, Singapore, Japan, China, Russia, India and Brazil.