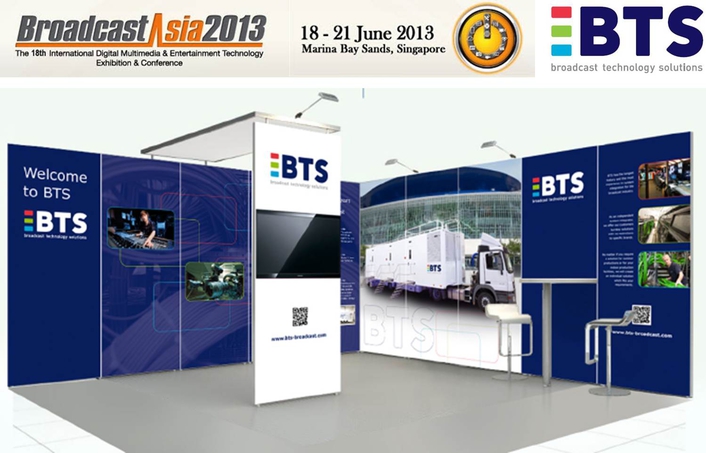 Experienced system integrator, now independent again, presents unique technologies and solutions to the Asian markets
In August 2012 the former system integration division of Grass Valley had been sold to Partner Capital, a private investor group and been renamed in BTS broadcast technology solutions in continuation of the long history of the company dating back to the 1930ies with the world’s first OB van constructed in 1934.

Now as an independent solution provider BTS for the first time will exhibit during Broadcast Asia 2013 in Marina Bay Sands, Singapore, Hall Level 5, Stand 5D4-04. BTS broadcast technology solutions will present their state-of-the art solutions for studios and outdoor broadcast, many of them based on unrivaled own technologies developed at their premises in Weiterstadt, Germany.

During IBC 2012 in Amsterdam BTS made headline news exhibiting a huge high tech OB van for operations in the Middle East, protected against heat and sand and allowing optimal performance under excellent working conditions. This OB van carried the production number 555, counting from the move of the company to Darmstadt in the 1950ies. Some weeks ago BTS announced that in cooperation with Grass Valley Asia they are constructing an OB van for the SEA Games in Myanmar in December, to be delivered in record breaking time in August 2013.

During Broadcast Asia the BTS top management will be present to explain the whole range of services the company can offer to potential customers in Asia and to clarify the advantages of working with the company which has set standards over decades and found solutions for the most complicated challenges.

BTS is an internationally experienced and innovative systems integrator in the television broadcast industry. Its customers include broadcasters, production companies, news agencies, archives, OB vans and corporate TV service operators. BTS works with the leading product manufacturers. Both the stationary solutions for studio production, play out, news, distribution and archiving solutions as well as the mobile OB vans and flight cases meet the highest standards of productivity, flexibility and reliability. BTS helps its clients build and optimize their broadcast systems: for a program in quality, safety and efficiency, that are the best in its class.