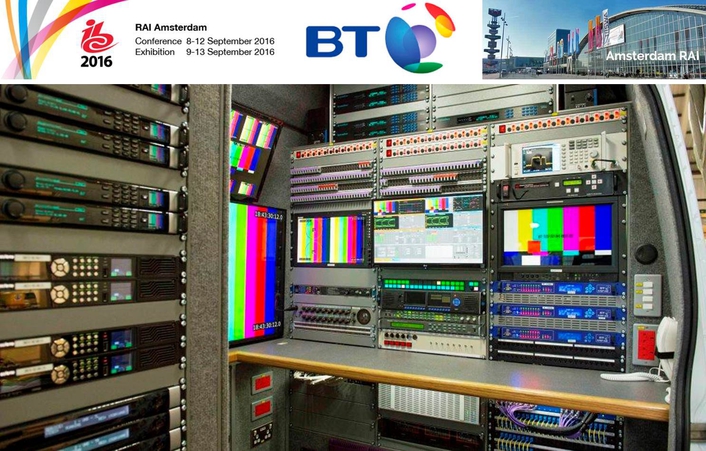 BT will unveil the latest Ultra High Definition (UHD) outside broadcasting links truck at this year’s IBC conference in Amsterdam. The vehicle will be used by BT’s Media and Broadcast (BT M&B) division to broadcast BT Sport’s live coverage of the Round 2 AVIVA Premiership Rugby Matches in 4K.

The TES52 truck, which was designed and built by systems integrator, Megahertz, is the first vehicle in the UK capable of transmitting multiple HD and UHD/4K visions via fibre and satellite simultaneously. The truck will also use the latest encoding equipment, which has been specifically designed for premium live sports broadcasting.

BT’s digital and media broadcast services arm will display the TES52 truck on their stand [O.C01 in the Outside Exhibition area] from 9 - 13 September. 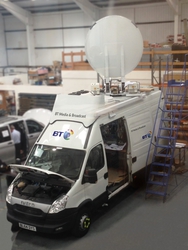 The showcase will also host a number of panel speaker sessions which will include experts from Adstream, the BBC, Ericsson, Eurovision, Megahertz and Nevion. The sessions will cover topics such as The Next Generation of Networking, 4K HDR and Beyond, Designing a Broadcast Truck for the Future and Cyber Security. Full details of the schedule are available here.

BT M&B recently completed work upgrading 20 leading football stadiums around the UK with an ultrafast fibre network which can support multiple camera feeds simultaneously, with perfect picture quality. 40Gbps of fibre capacity will run directly from each Premier League football ground to the BT Tower. The fibre cabinets which are part of the new network will also be on display at BT’s IBC stand.

Mark Wilson-Dunn, Vice President at BT Media and Broadcast, said: “We’re really excited to be showcasing our latest technology innovations at IBC, as it’ll give us even more opportunities to meet and share ideas with others from the industry. We believe that we have the UK’s best outside broadcast links fleet, delivering the highest quality footage to broadcasters and sports fans across the world in all formats including 4K UHD. It’s not good enough to just keep up in this industry. We owe it to our clients to keep innovating and lead from the front.”

BT recently signed a major deal with the BBC to provide the broadcaster with global IP network services for at least 7 years from April 2017. Under the agreement, BT is delivering a brand new optical fibre network designed to give the BBC flexible network capacity to support and accommodate their needs, now and into the future.

About BT
BT’s purpose is to use the power of communications to make a better world. It is one of the world’s leading providers of communications services and solutions, serving customers in 180 countries. Its principal activities include the provision of networked IT services globally; local, national and international telecommunications services to its customers for use at home, at work and on the move; broadband, TV and internet products and services; and converged fixed-mobile products and services.  BT consists of six customer-facing lines of business: Consumer, EE, Business and Public Sector, Global Services, Wholesale and Ventures, and Openreach.
For the year ended 31 March 2016, BT Group’s reported revenue was £19,042m with reported profit before taxation of £3,029m.
British Telecommunications plc (BT) is a wholly-owned subsidiary of BT Group plc and encompasses virtually all businesses and assets of the BT Group. BT Group plc is listed on stock exchanges in London and New York.

About BT Media & Broadcast
BT Media & Broadcast (M&B) is the digital media and broadcast services arm of BT Wholesale. All of the UK’s digital terrestrial TV is underpinned by M&B’s specialist media network, whilst it is also responsible for delivering outside broadcast services from over 150 sports and news locations around the UK.
M&B’s global media network links every major location around the world where broadcast or film content is created or distributed.