BSI to re-focus on rental of mobile RF cameras

All of these have been designed to capture unrivalled shots of action in live sports and entertainment, and to provide reliability in a live broadcast situation.

The Real Freedom system has built in camera control, and was used on the recent Aviva Rugby Final at Twickenham. It supports 1080p50 3G format, which is ideal for 4K up scaling and future archiving needs.

BSI’s mini Point Of View (POV) cameras have full camera control including a motorised Iris which operates with a Sony RCP, for situations where a freely moving camera can get a unique but important view, for example as a “Ref-Cam”.

BSI’s cameras are all offered either as a dry hire package or with support from BSI’s own technical team who will provide installation and assistance on site.

The staffing in BSI’s Watford base has been re-organised to bring all of its technical resources to support customer operations, with the RF team now headed by Sebastien Ploeger, and the R&D team led by Sacha Rossek. All report to Technical Director, Tony Valentino, and are closely supported by BSI’s USA office in Hannover MD.

This is a promotion - Tony Valentino has been with BSI since 2011, in the role of Operations Manager.

Broadcast Sports Inc. (BSI), uses its own purpose-built RF camera hardware to provide live footage for top sports events, such as the Sky Sports F1, BT Sport Aviva Rugby including the  Final at Twickenham. However the company’s work is broader than just live sports, it also supplies RF cameras for live news broadcasts, for example the Royal Welsh Show – an agricultural show taking place in mid July.  In the USA, the company uses 13 mobile units to cover the Indy Racing League, Nascar Nationwide Series, PGA Tour, the US Open, and numerous other sporting events, plus live news coverage of events such as the political conventions. 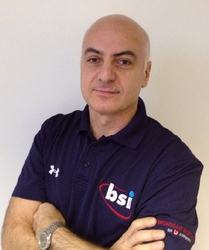 Valentino brings over 20 years’ experience of operating RF cameras, having started working with “F1 on-board cameras” around 1989. He has been involved in many of Europe’s most iconic and technically challenging live events – top motorsports, the Le Mans 24 Hour Race, the Premier League football series, several international football tournaments and the University Boat Race.

At BSI UK, he is responsible for day-to-day operational activities, leading the company’s team of engineers and operations staff, and directing freelancers. He is also responsible for liaising with customers, and co-ordinating activities on location, to ensure that all their requirements for equipment and crew are met.

Valentino was an early exponent of RF links for High Definition cameras and has already worked on live 4K productions at BSI UK, using the company’s Real Freedom camera systems to provide RF links and encoding for a 1080p50 3G feed that can be up-scaled for 4K.

“BSI is known for providing the exclusive RF and mobile cameras that bring a production to life. Our latest cameras are surprisingly easy to use and could make a huge difference to the live coverage of any of the summer events and festivals.”

About Broadcast Sports
Broadcast Sports is a leading provider of wireless technology and communications systems for television broadcasting.   Headquartered in Hanover, MD, USA, BSI provides HD on-board cameras and wireless audio for a wide range of entertainment events around the world including the NASCAR, NFL, the PGA Tour, the LPGA Tour, the Indy Racing League, the Breeder's Cup, the X-Games, the Kentucky Derby, the US Open,  BSI’s cameras are also used by NASA in the astronaut's helmets.