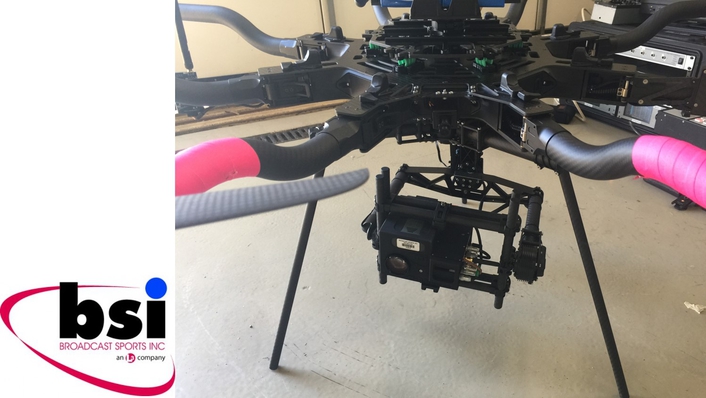 BSI’s Drone Camera is 4K ready – it uses the 1080p/50/3G standard which broadcasters use for upscaling to 4K. The camera is mechanically stabilized, with Pan and Tilt built in, and BSI is using its own BSI’s REAL FREEDOM wireless communications technology to provide remote control of the motorized Iris, Zoom and Focus. This allows live pictures from the drone camera to match with other cameras in a large-scale live production.

BSI’s Technical Director, Tony Valentino, says, “The Drone Camera is very good for live filming, as it allows the colours to be matched correctly, which can’t be achieved with ordinary SLR-type cameras. We believe this is the world’s first live broadcast from a drone  with 1080p 50 3G images and all the control features that are required for a world class live production.”

BSI completed its tests with the Drone at Denham in early January and the company has just completed similar tests in the USA.

Broadcast Sports is a leading provider of wireless technology and communications systems for television broadcasting.   Headquartered in Hanover, MD, USA, BSI provides HD on-board cameras and wireless audio for a wide range of entertainment events around the world including the NASCAR, NFL, the PGA Tour, the LPGA Tour, the Indy Racing League, the Breeder's Cup, the X-Games, the Kentucky Derby, the US Open,  BSI’s cameras are also used by NASA in the astronaut's helmets.