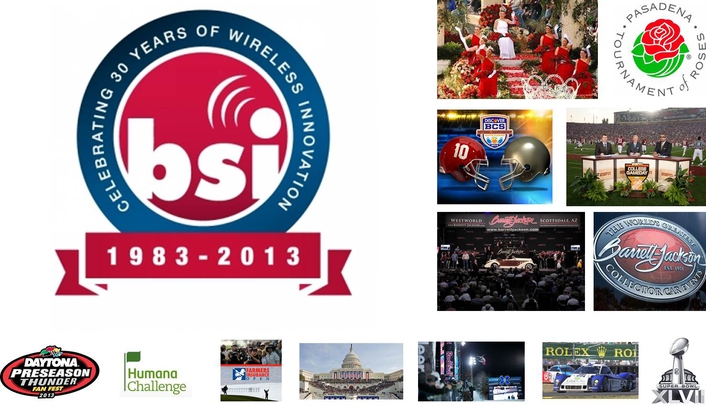 .
Broadcast Sports, Inc. (BSI) has been providing innovative wireless solutions to the broadcast industry since 1983 and the company is showing no signs of slowing down in 2013. As one of the first companies to enter the world of wireless broadcast production, BSI has spent the last 30 years finding ways to make live television more compelling. Today, BSI continues to remain a leader in the industry as demonstrated by the diverse line-up of high profile events it will provide RF services for in January.

BSI kicked off the month in Pasadena, California providing three RF camera systems and four proprietary MIC 1500 "Blue Steel" wireless microphones to ESPN for the Tournament of Roses Parade and Rose Bowl Game on New Year’s Day. Yesterday, BSI was in Miami providing ESPN with another three camera systems and five "Blue Steel" microphones for the BCS National Championship Game. On January 16, BSI will be in Scottsdale, Arizona for the Barrett-Jackson Collector Car Auction. This is the second year in a row the company has been the RF vendor of choice for SPEED in their coverage of this year-long, four-event series. This year, BSI will be supporting the televised auction with six RF camera systems and six "Blue Steel" wireless microphones as well as numerous production communication systems.

Rounding out the month are the NASCAR Fan Fest, Humana Challenge Golf Tournament, Presidential Inauguration Parade and Speech, ESPN’s Winter X Games, Farmers Insurance San Diego Open, and the Grand American Racing Rolex 24. At the end of January, BSI will head down to New Orleans in preparation for The Big Game where it will provide seven RF camera systems, four "Blue Steel" microphones, six additional wireless microphone systems and a full complement of communications devices for the event.

“I can remember the days when we would call January a slow month,” says BSI co-founder and General Manager, Peter Larsson. “Now, 30 years later, it’s right on par with some of our busiest months in the summer. I’m thrilled to start out our 30th Anniversary year on such a positive note. We have a lot of exciting things happening this year and it’s nice that everything coincides with this significant milestone.”

In addition to a variety of 30th Anniversary celebrations the company has planned in 2013, BSI will be expanding their UK offices, deploying several new technologies and unveiling a new business enterprise at NAB in April.