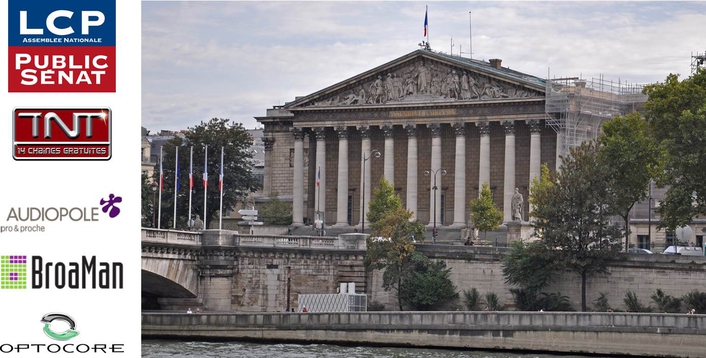 The French Parliament Building
La Chaîne parlementaire (The parliamentary channel) is a French television network responsible for broadcasting activity from the National Assembly of France (LCP) and the Senate of France (Public Sénat) — made available through TNT digital terrestrial television.

Created in 1999 at the request of the National Assembly of France to broadcast initially twice a week on France 3, by the following year it had also encompassed the Senate of France. Today it broadcasts 24 hours from the Assembly followed by 24 hours from the Senate having obtained its own TNT frequency. This makes high demands on the transmission facilities.

Last year, production needed to improve the bi-directional communication infrastructure, and Philippe Delépine, sales engineer at Audiopole, undertook a site survey before providing a solution based around BroaMan/Optocore network components.

“They had some remote channels and wanted connectivity between the cameras and the main control room over distance,” he said. “We started discussing with them about fibre and how to carry the video signal around the four parliamentary columns that dominate the room [the main room is called La Salle des Quatre Colonnes]. However, little did he realise that this first phased would develop into a much bigger project.

“Initially, we proposed a multiplex solution down a single fibre using two V3R-FX-INTERCOM-SDI — the BroaMan video platform with audio [later to become known as MUX22],” he said. “This would function as a 5-in, 1-out point-to-point system.”

This would give production five separate video signals for when ministers are interviewed on site. Via the BroaMan devices all the video signals could be multiplexed onto a single Optocore fibre, with the programme sending back signals from the control room to the Salle des Quatre Colonnes.

“The ports in and out of the BroaMan devices carry the main audio programme and also the intercom both ways for a connection with a wireless Clear-Com Tempest system over several hundred meters,” continues Delépine “Previously they were only able to carry one signal and no audio.”

With simplicity of set up and effective functionality, “the customer found this to be the perfect solution for carrying video, audio and intercom,” summarised M. Delépine.

But already a second phase was being considered as the Assembly saw the potential of extending the system further to other locations and creating a centralised routing system by redeploying old devices with further interfaces from BroaMan.

Explained BroaMan application engineer, Maciek Janiszewski, “At the second stage we delivered a Route66 as the centralised router and two initial MUX22 units [a third will be supplied later].

“Route66 is configured to combine five satellites — integrating the older V3R-FX-INTERCOM-SDI units with the new MUX22 devices. Every channel that appears on the satellite is available in Route66 and can be routed to any of the outputs.

“As we offer non-blocking video and audio matrix, one input can be routed to multiple outputs.”

Both the V3R-FX-INTERCOM-SDI and MUX22 devices are equipped with the Clear-Com board, offering four 4-wire intercom ports each, while a X6R-FX-INTERCOM provides local audio and intercom I/O in the central location, where the ports are used either for Clear-Com intercom or line level audio.

The new system is controlled by the latest Optocore software, which introduces advanced monitoring features and video matrixing, and will be supported by Audiopole.

The system integration was carried out by Paris-based AV specialists, CVS.