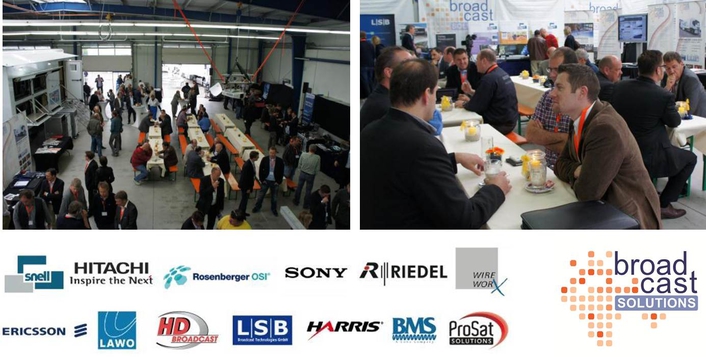 .
On the 13th of June Broadcast Solutions GmbH hosted June its annual Open House event. More than 100 visitors and friends came to Bingen to join the exhibition of delivered and currently produced solutions.

During the event Broadcast Solutions and selected partners in the broadcast industry presented news and current projects. One major highlight of this year's event was the support truck under construction for ANO Sports Broadcasting/Russia, a vehicle which is unique with its uplink and flight case based technology.

Another highlight was Mediatec’s HD12, a vehicle within Broadcast Solutions Streamline Concept, this recently delivered model has more space for production with its extendable production room.

Furthermore, HD Broadcast was showing its 3D capable high-definition OB-Truck which was producing the unilateral signal of the UEFA Champions League Final in Munich on 22 May 2012 for SAT.1. Many visitors attended to the satellite transmission workshops, this year a real hands on experience to learn about the features of the new FlyAway system and the new Eutelsat approved auto-pointing range of antennas from ProSat Solutions in live operation.

During the OPEN HOUSE 2012 Stefan Breder, CEO of Broadcast Solutions and Michael Gilman, CEO of slomo.tv Inc./USA signed an exclusive distribution agreement for the products of slomo.tv. The slomo.tv product family includes Simple R, Fulcrum, Dominator, blackjack and videoReferee® with wireless cameras. At the OPEN HOUSE slomo.tv presented for the first time the smallest Replay server SimpleR, a replay and ingest server with 3 in- and 2 outputs.

Finally the event ended with beer from the tap, grill specialties and a buffet. Together the visitors and exhibitors enjoyed the live coverage of the UEFA EURO Championship matches Portugal-Denmark and Germany-Netherlands on a large screen.