Broadcast Solutions implemented a new HD TV-studio facility for Switch TV, a brand new channel from Nairobi, Kenya. Broadcast Solutions with their Hungarian team acted as the main contracting partner for this unique project. The station is a new non-profit subsidiary of the Kenya Red Cross and is targeting the 18-35 old group to educate and to entertain them. With a variety of local productions, live shows and news programs, this new channel spices up the regional media landscape and is one of the most modern studios on the continent up to date.

Switch TV required a studio with four sets including a green box, with Sony studio and remotely operated cameras, ARRI LED lighting and a newsroom and post-production system. Apart from the broadcast equipment, Broadcast Solutions also delivered the IT infrastructure for the supporting office with 50 workplaces. All the systems were tested, configured and pre-installed in Budapest before sending them to Nairobi to enable faster and smoother on-site installation. The overall planning and implementation, from assignment to going live, took six months only.

The core of the studio and video system is a 12G-capable Ross Video Ultrix 72 x 72 hybrid router with integrated multiviewer. By using a hybrid router, the glue infrastructure was simplified, offering real agility in the sound department which is centred on an Allen & Heath D-live digital mixer. The studio runs with Sony HSC-300RF and Sony BRC-H800/AC cameras whereas the video production is based on a Grass Valley Kula mixer and a Tricaster TC1, used for the green-box shots. Ingest and playback works with Avid Airspeed 5500 servers and Interplay

Command. Switch TV’s news programs are created and orchestrated with the help of an Octopus Newsroom system which controls playback of clips, on-air graphics and Autoscript IP prompters. Communication between the production team members is facilitated through an AEQ Crossnet Intercom system which uses Dante networked audio. To give the operators a stylish and comfortable working environment Broadcast Solutions designed and delivered custom-made furniture for the studio control rooms. 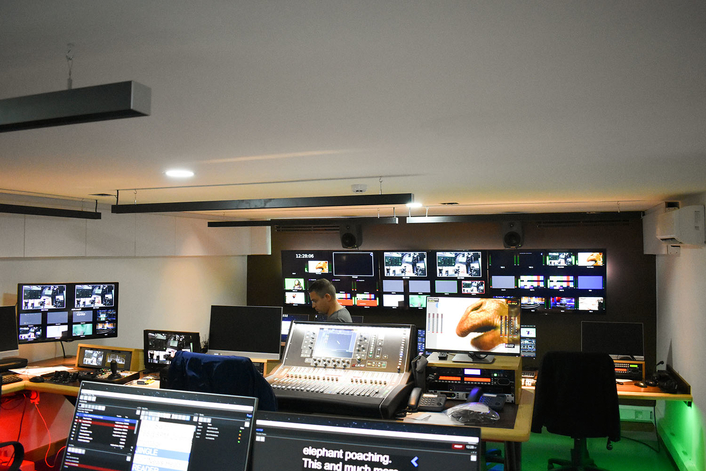 Post-production relies on Avid Nexis shared storage and Interplay Production Asset Management. The journalists and editors rely heavily on the MediaCentral | UX web-based editing system which creates on-the-fly streaming proxies from the high-res materials and enables basic editing for currently up to 15 journalists at the same time. The ability to work from the office desks or even from remote gives the editorial staff flexibility and shortens the turnaround times. Transcoding and file movement jobs are done with an FFASTRANS server farm which enables easily expandable operation. For on-location and on-site shoots, Switch TV relies on Sony PXW-X320 cameras together with Mobile Viewpoint 4G live streaming units.

Scheduling and planning the programs is done in Commlaude’s PlanAir channel management system. The non-live contents are played back from Playbox Airbox Neo channel-in-a-box servers. All the program materials are backed up with a Promax LTO archive. To give the staff proper monitoring of the channel and its competition, Broadcast Solutions installed a custom-made IPTV-system that processes SDI, DVB-T and DVB-S inputs. Besides the enterprise WIFI and CCTV solution Broadcast Solutions implemented a customised facility monitoring system that checks and reports line voltages, power usage, temperature and humidity.

With this HD TV-station in Nairobi and using the latest technologies and workflows, Broadcast Solutions enabled Switch TV to produce cutting-edge content for the East-African region.