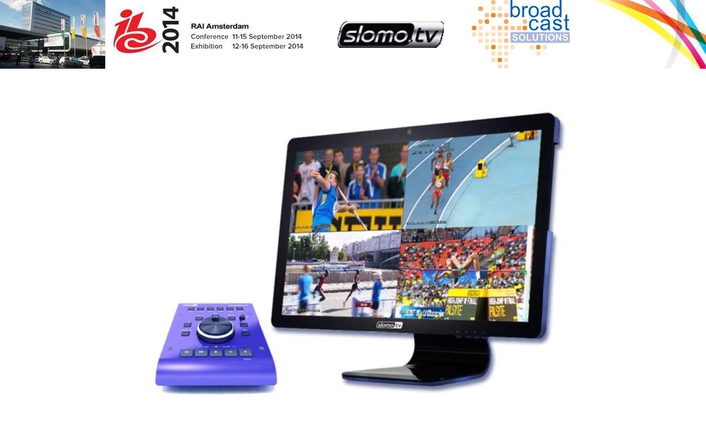 World premiere of VideoReferee Jr. product at IBC, 8.A21
At IBC2014 Broadcast Solutions GmbH as exclusive distributor will present the complete product range of replay system specialist slomo.tv. On two locations (A21 and A 84) in Hall 8 visitors can experience all product lines of slomo.tv. As a world premiere slomo.tv will show its VideoReferee Jr. for judges and referees. The compact yet powerful VideoReferee Jr. provides full 4-channel HD quality with a monitor built-in server.

VideoReferee Jr.
At IBC show in hall 8, stand A21 slomo.tv presents a new member to the slomo.tv family: VideoReferee Jr. The product is a mobile and economical sports video judging system that can be used during sport events for recording the entire event as well as for analysis of controversial moments. VideoReferee Jr. comes in several versions: 2 and 4 channel in SD or HD. 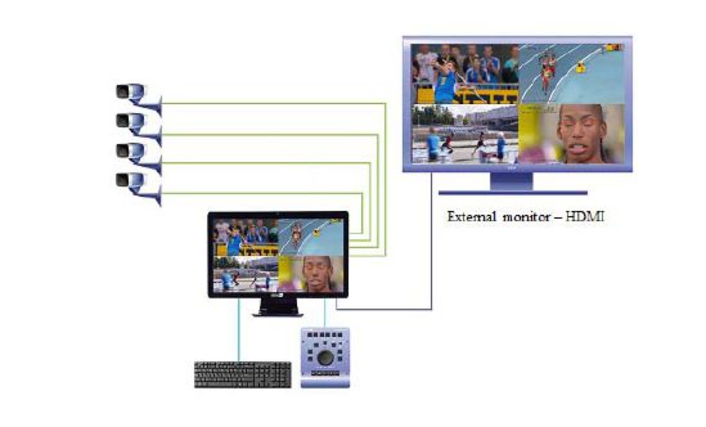 The system’s remote control provides such functions as camera selection, searching and marking specific events. Viewing in real time of searching of recorded material, quad or single channel view or zoomed image is possible. Backup export of marked scenes can be done to DVD or MP4 file. Slomo.tv as the leading manufacturer of multichannel referee systems (already in use at Kontinental Hockey League HKL) now sets new standards in smaller compact sized systems with up to 4 channels.

Slomo.tv Simple R
At its stand in Hall 8, A84 Broadcast Solutions shows different configurations of slomo.tv’s Simple R system. Simple R is the world’s most compact SD / HD multi-channel recording and replay system on the market. With only one RU 19” Simple R offers unique functions. It is the only available system in 4, 6 or 8 channel dimension that allows search through all channels simultaneously. Furthermore replay of all channels in slow-motion are possible which offers live-slow-motion capability in consecutive order – a feature until now only possible with NLE-systems during post production. Simple R’s GUI provides intuitive user interfaces allowing short training periods without sacrifice of professionalism and results. Within Simple R (as in all slomo.tv products) storage is based on SSD drives. This allows operation under extremely harsh conditions. Due to its compact design the SSD permits recording of up to 125 hours quality HD video. In addition the option “3x Supermotion” will be at display on the stand, showing the interaction of slomo.tv products with a Hitachi Super-Motion camera. 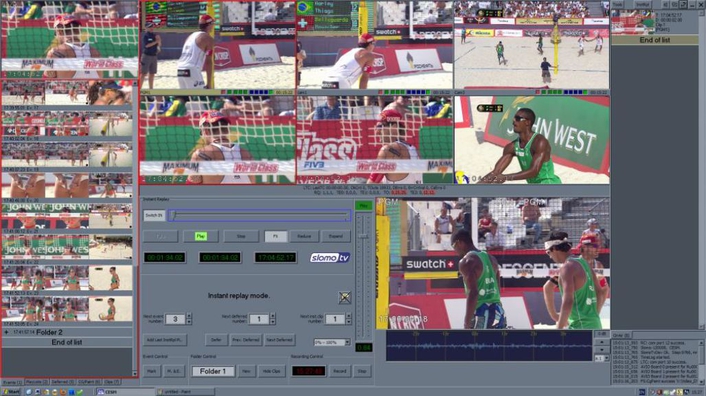 More highlights at slomo.tv’s stand will be the 12 channel Replay Server Black Jack and the 3G edition of Simple R which is available to the market now. Visit slomo.tv at IBC 2014 and experience live the most compact and powerful multichannel recording and replay systems available. Our team is looking forward meeting you in hall 8, stand A21 and A84.

If you want to schedule appointments with Broadcast Solutions' engineers please refer to Sandro Glanzer. He can be reached at +49 6721 4008-107 or via E-mail s.glanzer@broadcast-solutions.de.

Broadcast Solutions is one of Europe’s biggest and fastest growing system integrators. For more than ten years the German based company stands for innovation and engineering „Made in Germany“ in the business fields of OB-Vans, SNGs and ENGs. With subsidiaries in Europe, Asia and the Middle East Broadcast Solutions plans, implements and realises projects in the areas of Satcom, fixed Studio and MCR installations, sport arena multimedia solutions as well as mobile Surveillance units. A further emphasis of the company is to consult our customers when it comes to workflow optimization, trainings and production consultancy. With more than 80 employees worldwide and working as a hardware independent system integrator Broadcast Solutions offers its customers tailor-made solutions – from layout to implementation.