Broadcast Solutions GmbH to exhibit at moving.picture.pavilion at ProLight+Sound 2015 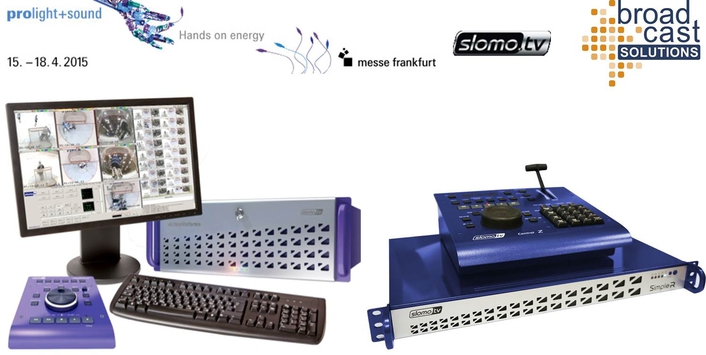 Focus on slomo.tv products Simple R and videoReferee®
At Prolight + Sound 2015 Broadcast Solutions GmbH from Germany will be presenting multichannel and slow-motion solutions by slomo.tv. From April 15 to 18 the Broadcast specialist will show new slomo.tv products at the moving.picture.pavilion in hall 9.0, B14.

The company will present Simple R, a very compact - yet powerful multichannel recording and replay system. Furthermore videoReferee®, a mobile and economical sports video judging system that can be used during sport events for recording entire events as well as for analysis of controversial moments, will be at display.

Simple R
At the moving.picture.pavilion stand in hall 9.0 / B14 Broadcast Solutions GmbH will present the Simple R system in several configurations. Simple R is the most compact Full-HD record and replay system available on the market. With just one 19” RU, the system offers functionalities available never before.
Simple R comes as a 4, 6 and 8 channel system that is capable of simultaneous search in all recording channels. Furthermore, all channels can be viewed in slow-motion. Now the Simple R user is able to realise live-slow-motions in true chronology – a feature possible before only with NLE-systems during post-production. Simple R’s GUI works intuitively, thus allowing the user to learn the system quickly without compromise on the professional output.
Simple R, like all slomo.tv servers, use only SSD-drives, allowing the system’s use on the go even under the harshest conditions.

videoReferee®
Another system at display at Broadcast Solutions‘ presence at the moving.picture.pavilion (Hall 9.0 / B14) is slomo.tv’s videoReferee® system. The product is a mobile and economical sports video judging system that can be used during sport events for recording the entire event as well as for analysis of controversial moments.
videoReferee® comes in several versions: 2 to 12 channels in SD or HD. The system’s remote control provides such functions as camera selection, searching and marking specific events. Viewing in real time of searching of recorded material, quad or single channel view or zoomed image is possible. Backup export of marked scenes can be done to DVD or MP4 file.

Broadcast Solutions is presenting slomo.tv products at Prolight + Sound at the moving.picture.pavilion in hall 9.0 / B14.