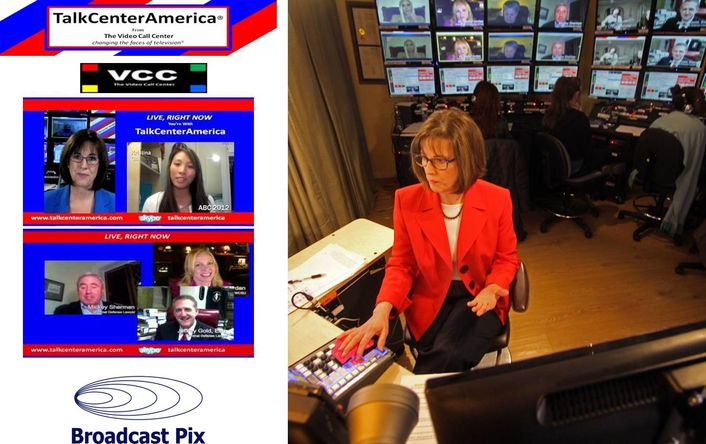 Inventor Tom Wolzien company received a patent for VCC on July 1. A 45-year television veteran, Wolzien serves as a consultant for large media organizations through his company, Wolzien LCC, and is the lead independent director for TiVo, Inc. Since last year, Wolzien and his team have been testing the VCC system by producing TalkCenterAmerica®, a series of call-in shows covering a variety of topics.

“VCC is right at the intersection of social and mass media, TV and the Web,” said Wolzien. “What’s unique is that the system doesn't just handle a single IP video call, but it’s designed to handle multiple video calls simultaneously, each with the power of its own computer – essential for any live caller-based TV program.”

With VCC, the on-camera host produces the call-in show without a traditional control room. Broadcast Pix API and Fluent™ Macros allow the VCC software to provide the host with a great deal of production flexibility, such as triggering sequences of individual key/shot combinations that can be modified based on available callers. As a result, with no content costs for callers and minimal staffing requirements, VCC is a cost effective approach to producing live programming.

Using Skype and similar technologies on various devices, multiple Web video callers can connect to the show. Viewers can see the callers and whatever the callers want to show. Proprietary CAT™ Caller Acquisition Software assists screeners with incoming calls, audio metering, video cropping and conversion, and return video. Plus, a patented Text Overlay superimposes caller names and locations over the caller’s picture at the screener’s position and remains on-screen when the caller is added to the live production."The innovative technical team at Broadcast Pix has been supportive every step of the way as we implemented the Video Call Center,” said Wolzien. “As an inventor, I have appreciated their readiness to help us solve the challenges of integrating the complex aspects of television automation in a way that appears simple to the host who solely controls the air.  And on the technical side, I have appreciated their rapid and creative support when we have run into problems.”