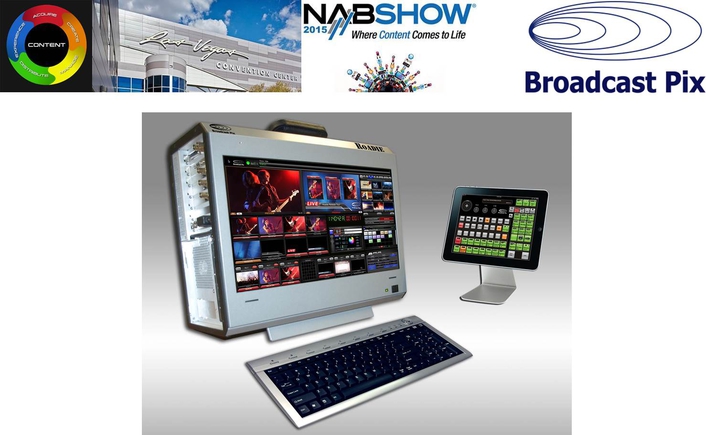 “Roadie is the portable production solution that video professionals have been waiting for,” said Steve Ellis, CEO of Broadcast Pix. “It’s more than just a bare bones switcher offered by our competitors. Roadie is packed with all the tools you expect from a Broadcast Pix switcher – and it’s all integrated to simplify production workflows. It’s a great standalone solution and a perfect companion to operations that already use Broadcast Pix in their control rooms.”

Ruggedized for location work, Roadie weighs about 20 pounds and features a durable aluminum alloy chassis. A built-in handle allows for easy transport. Roadie’s integrated 17.3-inch HD display is a resistive touchscreen with a scratch resistant top coat, and is protected during transport by a removable cover. The system also includes a keyboard and mouse, but can also be controlled through the built-in virtual panel (just add a second touchscreen), optional Broadcast Pix 500 or 1000 control panel, or an iPad using the iPixPanel app.

Cloud-based content from Skype, Twitter, and other resources can be included in live productions. All sources are automatically ingested and scaled while maintaining lip sync. Roadie also includes built-in Wi-Fi as well as two network inputs to accommodate a hotspot for connecting to cloud-based services or connecting an iPad for system control. Plus, with the new Show Transfer utility, operators can back up and move all elements of a program between Roadie and a Broadcast Pix Flint™, Granite™, or Mica™ system installed in a separate control room.

Roadie will be available in April, with pricing starting at $12,495. Optional accessories include a soft carrying case with shoulder strap and custom hard rolling case.