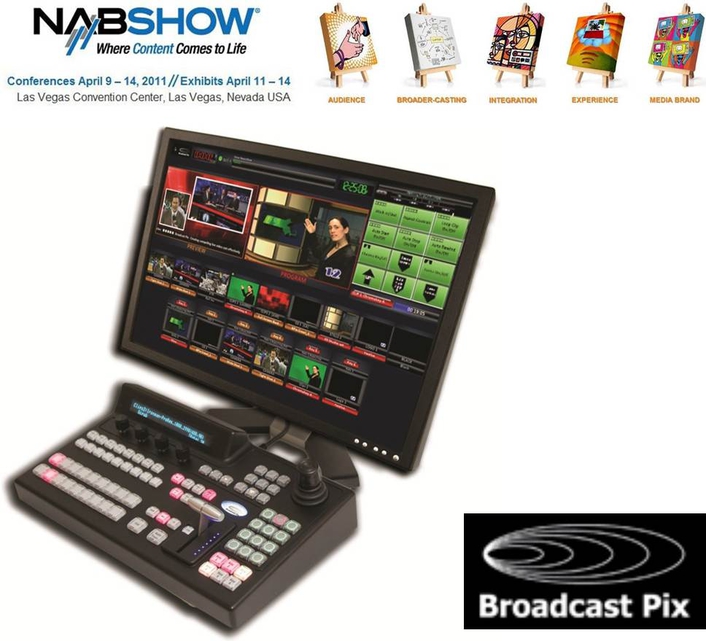 The new Granite and Slate 500 systems significantly lower the entry point for Broadcast Pix systems with a control panel to $24,900 and $14,900, respectively. They provide a tactile control surface with comprehensive monitoring of video and files, as well as complete control of the system's clip store, CG, cameras, and other devices. The new 1 M/E control panel supports up to 18 sources and six keyers for overlays of picture-in-picture boxes and graphics, yet is so compact that it fits in a rack drawer.

“We have the best control surfaces for combining cameras, clips, and graphics to create compelling live video – and our new 500 panel makes it even more cost effective," said Ken Swanton, president of Broadcast Pix. “And, all our Granite and Slate customers worldwide will soon benefit from the software enhancements we are announcing today."

The Granite 500 HD system offers 11 HD/SD-SDI inputs (expandable to 22) and six HD/SD-SDI outputs (expandable to 12). The Slate 500 hybrid system offers four or eight analog, HD/SD-SDI, or DVI inputs and four (expandable to five) outputs. Both systems provide seven channels of file-based inputs from the built-in clip store and graphics systems. Plus, both include the complete suite of Fluent™ file-based workflow tools, including Fluent-View monitoring of video and files, Fluent Watch Folders for importing files, and Fluent Macros, which combine sophisticated switcher effects and files with one-button recall.

Apple Final Cut Pro users can take advantage of the new Granite pipeline for ProRes clips and QuickTime Animations. This simplifies the production workflow for animations, as operators can simply copy a single file to the Broadcast Pix system and instantly load animations with key and audio. New playlist capabilities enable a sequence of clips to automatically play and then transition to the source on preview.

Granite 2.0 also communicates with Chyron Lyric PRO 8. The optional CG software creates sophisticated titles and 3D animations that can be accessed from any Broadcast Pix control surface, seen on Fluent-View, played from the system's graphic and clip stores, and easily edited on-air. It also provides access to Chyron’s AXIS Web-based services, which allow users to obtain and share broadcast-quality graphics. And 2.0 adds rolls and crawls to Granite's Harris CG.

Customers can also purchase the new 500 control panel separately for $3,000 to enhance the user interface for Slate Portable, Slate 100, and Granite 100 systems. Granite 2.0 and Slate 8.5 will begin shipping with all new systems in May, and will be available for download for existing customers May 16. The new Granite and Slate 500 models will ship in April.

Broadcast Pix is the leader in live video production systems. Its systems provide the best control surface for combining cameras, clips and graphics to create compelling live video. These surfaces enable total control of the built-in multi-format switcher, clip store, graphics system with a Harris or Chyron CG, and device controls. Its Fluent™ workflow enables files and data to be easily incorporated from other parts of the studio. Broadcast Pix systems are a fraction of the cost of a conventional control room to buy, staff and operate. Systems are available in both HD Granite and hybrid Slate systems. They range from small systems controlled by a touch-screen, mouse, iPad or Droid, to sophisticated 2 M/E control panels. Customers include leading broadcast, corporate, education, religious, government, webcast, entertainment and mobile studios in more than 80 countries.