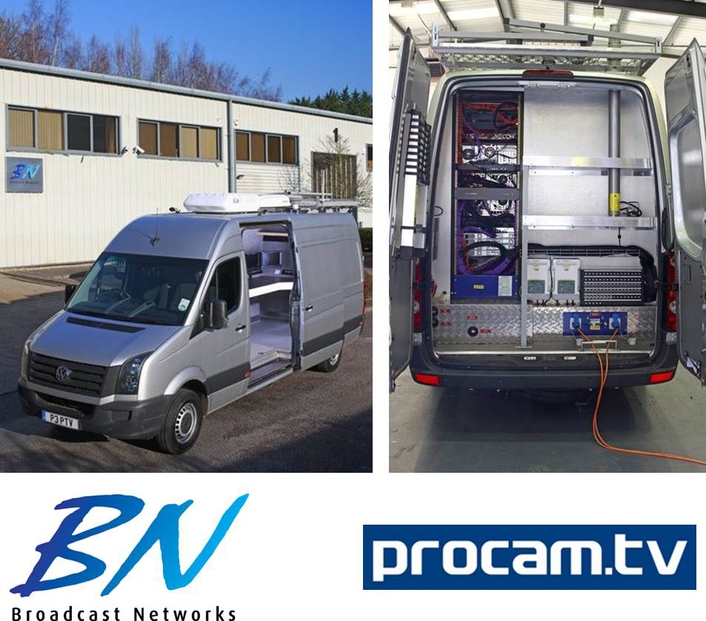 The new vehicle can accommodate up to 12 cameras and is based on a sturdy Volkswagon Crafter chassis. It has sufficient room to accommodate a crew of five and incorporates some of the most sophisticated broadcast and production technology on the market.

John Brennan, Managing Director of Procam Television, says: “Our philosophy has always been to invest in the very latest technology so that we can provide our customers with the right solutions to make their productions easier and, where possible, more cost effective.

“We have invested in this new vehicle because we wanted to offer our customers facilities for continuous filming in a range of setting. We hope to see the Pro truck working in lots of different markets, and a large part of its attraction is its versatility and green ecological friendliness.”

With more than 25 years’ experience in designing and delivering media systems and Outside Broadcast vehicles to clients such as Chellomedia in Holland, Bloomberg in Germany, ITV and Arqiva in the UK, OB Team in Norway and SBP in Italy, Broadcast Networks was ideally placed to help Procam Television move into this new market sector.

“Choosing Broadcast Networks was an easy decision to make,” Brennan adds, “With such a firm heritage in television production, it made little sense to go elsewhere.”

Perry Mitchell, Procam Television’s technical Director, says, “Our brief to Broadcast Networks was to provide us with a production vehicle that offered maximum flexibility and could also operate in situations where an external power supply wasn’t available. They achieved this by sourcing equipment with 12 volt inputs and by incorporating a 12 volt power system with on-board batteries and an AC inverter. This highly sophisticated power system was originally developed for the luxury yacht market, but it works perfectly on board this vehicle as the combination of 12 volt equipment and 12 volt power means that the truck can operator for up to five hours without access to an external generator or mains power.”

Procam Television’s new production vehicle is equipped with four Cinedeck RX two-channel High Definition tapeless digital video recorders, which were chosen because they have removable disks and accept a variety of formats including ProRes, DNxHD, Cineform and uncompressed 422 and 444, up to 1080p. The vehicle also has a Blackmagic 40 x 40 Videohub video router that can be used with iPad control and a Blackmagic ATEM 2M/E production switcher. 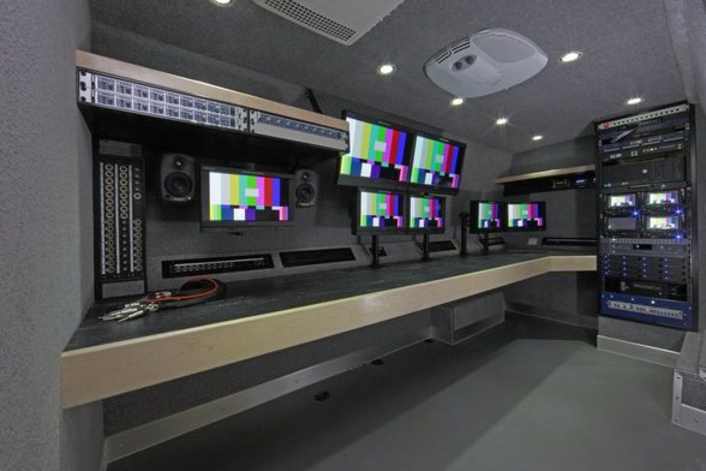 Also unique is the inclusion of seven Sony TRIMASTER EL™ monitors with proprietary OLED (Organic Light Emitting Diode) technology. Procam Television chose these monitors for their colour accuracy and was the first Sony customer in Europe to take delivery of the new units.

Matthew Slater, Project manager for broadcast Networks, adds that the interior of the vehicle has been carefully thought out to ensure maximum space and flexibility for the operating crews.

“The sound, production and engineering control areas are on a single desk across the length of the vehicle and we have designed the desk so that different audio mixers can be accommodated depending on the production,” he explains. “We have also cabled the vehicle in such a way that crews can specify the free-standing production equipment they want to work with and then have it quickly and easily installed.”

Externally, the vehicle has a pneumatic telescopic mast that can be used to mount cameras for overhead shots, plus a roof platform for camera personnel.

Since taking delivery of the new vehicle, Procam Television already has bookings in place for several observational documentary projects across the UK.

Such is the demand that Procam is currently planning the build of a similar fleet of vehicles.

About Procam Television
Since forming in 1991, Procam Television has become one of the leading hire facilities in the UK. Working with most major broadcasters, production companies and corporate blue-chip clients both in this country and worldwide, Procam strongly believe in providing individually tailored solutions with unbiased advice. Providing equipment and crews for shoots of various sizes, from one cameraman and his camera to a fully staffed studio crew, Procam Television can meet the needs of your production. Continually investing in the very latest broadcast technology, Procam strives to find the right solutions that make production easier and where possible more cost effective.