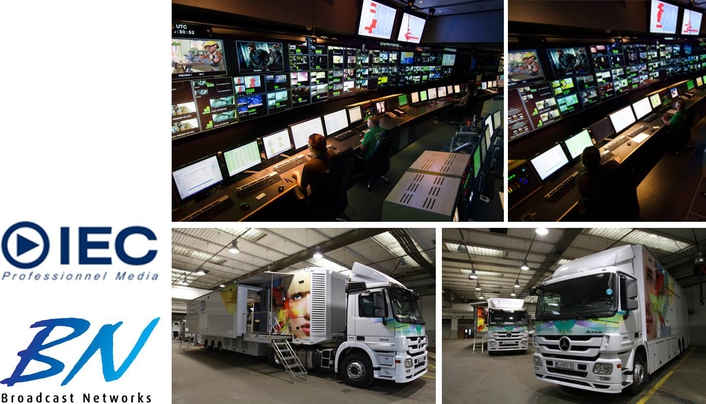 .
Systems integration specialist Broadcast Networks completed a number of diverse broadcast system projects during 2013 for international organisations such as Chellomedia, News UK and the Dutch Parliament.

"2013 was a successful year Broadcast Networks with both new and repeat business," says Managing Director Tom Haye. "As we start 2014, our new partnership with IEC gives us the investment we need to push the company to the next level, while the expansion of our team allows us to deliver the added value customers now demand."

As the preferred SI partner for Chellomedia, Broadcast Networks completed various key infrastructure projects for the international media company including the installation of a 24 channel playout system for a new Arts channel, the rebuild of Chellomedia's Master Control Room, an entire upgrade of the broadcaster's automation system to ITX2 and the installation of a number of smaller playout systems.

For Slovenian national broadcaster RTV, Broadcast Networks was contracted by Sony PSE to design and build two new 16-channel Outside Broadcast vehicles, which are now being used to capture various sporting events including the 2014 Winter Olympics in Russia.

Back in the UK, Broadcast Networks installed a Master Control Room and three new television studios at News UK's headquarters in London. The studios are now being used by The Sun newspaper to create news content for its online editions.

Other notable projects completed during 2013 include the installation of audio and video equipment at the Dutch Parliament, enabling meeting to be streamed over the internet, and the design and build of an 18 camera armoured surveillance vehicle for the Dutch police, which is now being regularly used to support large scale events.

As a systems integrator with more than 25 years’ experience, Broadcast Networks has a proven record in the delivery of high-quality broadcast, digital media, security & defence systems to an international client base.

Tom Haye believes the company's proactive approach to customers' projects is key to its current and future success, especially during a time of intense change for the broadcast industry.

"The traditional broadcast model is changing, with 4k now a serious contender as a new archive format and IP and data manipulation becoming increasingly crucial in our customers' daily lives," he explains. "As a systems integrator with experience in the live production and playout arenas, Broadcast Networks is ideally placed to deliver the leading edge solutions our customers demand and consolidate our position as a leading international systems integrator."

Broadcast Networks is a UK-based Systems Integrator with over 25 years’ experience in delivering solutions to clients the world over, including national broadcasters and global media organisations. From live production systems and OB vehicles, studios and broadcast infrastructure, satellite uplinks to content distribution, the company offers totally integrated and innovative solutions. With a highly experienced and knowledgeable team of solution architects and project managers, a flexible approach and a real commitment to customer service, Broadcast Networks works closely with organisations to meet their business and operational objectives and to deliver game-changing ideas.