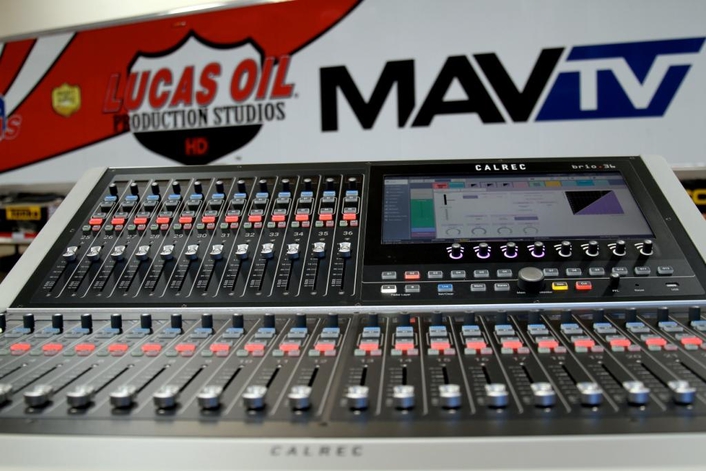 "When evaluating audio mixing consoles for our truck upgrade, we had specific requirements. Since this is our smallest truck, things can get pretty cramped, so it was critical that the console have a compact footprint," said Justin Conenna, audio engineer, Lucas Oil Production Studios. "Our owner is committed to giving exposure to smaller, grass-roots racing events that appeal to a niche set of motor-sports fans, so of course we were also on a strict budget. Besides its compact size and attractive price point, the Brio is highly flexible, modular, and easy to configure and reconfigure, and it comes with Calrec's outstanding reputation in the industry.

"I've used a lot of audio consoles in a lot of trucks, and I can tell you that there simply aren't any competing products that can match Calrec's ease of use, sound quality, and robust processing."

The new Brio joins a Calrec Omega console that is still in heavy use in Lucas Oil Production Studios' larger, 53-foot production truck. Targeted for completion by September, the upgraded 35-foot truck will be used to cover the full range of Lucas Oil motor sports, from motorcycle racing to drag car, drag boat, and off-road racing.

"Lucas Oil's choice of Brio for this upgrade represents one of the very first smaller-truck deployments of the desk in the U.S. It's a perfect showcase for Brio's advanced capabilities and precisely the type of installation for which we designed this compact and powerful audio workhorse," said Dave Lewty, U.S. regional sales manager, Calrec Audio. "Lucas Oil gives fans all of the thrilling action they can handle across virtually every type of motor sport, and it's exciting to know that Brio will be along for the ride."