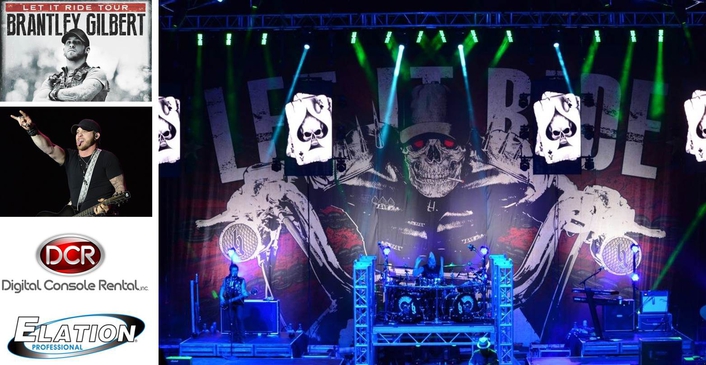 .
Country rock artist Brantley Gilbert is touring with the new indoor/outdoor EPT9IP LED video panel from Elation Professional and uses the professional-grade screens for a variety of effects and looks as an integral part of the set design.

“First, the screen looks great and the resolution is high enough for touring work,” he says of the 9 mm pixel pitch EPT9IP panels. “Second, it is IP65 rated and has the output for outdoor use.” Designed for professional touring, the spring leg of the tour was the EPT9IP’s debut outing, their outdoor rating and 5,000 nits of brightness allowing Howard to confidently use the panels in both indoor and outdoor settings.

The EPT9IP, which incorporates the latest dot correction technology for greater color and brightness uniformity, is made of a light weight yet durable die-cast aluminum frame with NTR-LoK compression pins for straight forward assembly and rigging. “The rigging hardware with the EPT9IP panels is simple and effective, unlike some other manufacturers,” Howard says of the interlocking system that requires no tools.

Howard has handled show design on both of Brantley’s headline tours to date, “Hell On Wheels” and “Let It Ride,” whose first leg ran from mid-March through mid-May. On the current tour design, four EPT9IP screens hang from an upstage position, each screen approximately 4 ft wide by 8 ft high. Raised and lowered during the show, the screens have been running graphical content to date but will also be running IMAG for this fall’s second leg.

Howard first met Gilbert in 2008, before the relative newcomer to the country circuit cut his current record deal, and has provided production for him ever since. Now, with an Academy of Country Music New Male Artist award (2013) and three number one hits under his belt, Brantley Gilbert will likely be a stable of the touring circuit for some time. Gilbert and crew are now on the summer fair and festival circuit with the fall leg of the tour kicking off in mid-September.