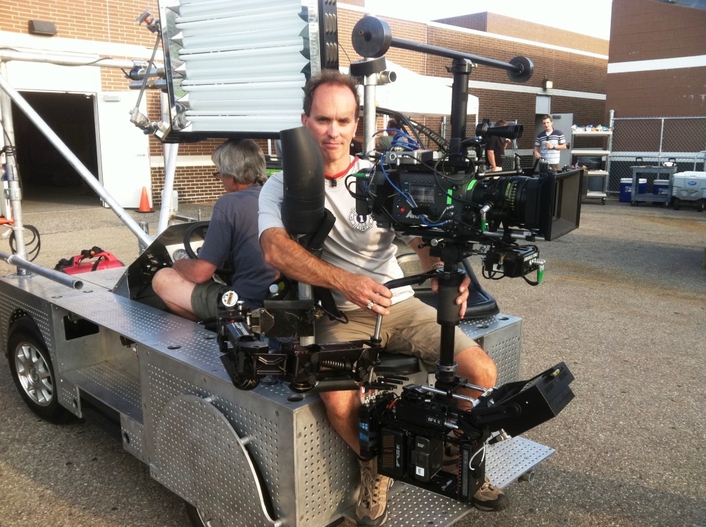 .
Cinematographer and Steadicam® Camera Operator Brant Fagan, SOC, has traveled the globe, working on countless films, episodic television programs, commercials and the occasional live event production. Working his way up through the ranks of the industry for the past 20 years, he has witnessed much technological change and evolution. And through it all, he has consistently employed batteries, chargers and Gold Mounts® from Anton/Bauer®, part of Vitec Videocom, a Vitec Group company and a premier global provider of batteries, chargers, lighting and other mobile power systems for the professional broadcast, video, film and healthcare technology industries.

“Anton/Bauer offers the best power source for motion picture production worldwide,” says Fagan, who has used ARRI ALEXA digital cinema cameras with Codex RAW recorders on several recent feature films and commercials. To power his Steadicam, Fagan runs Anton/Bauer HyTRON 140s, while powering his onboard cameras with DIONIC HCs. “When we’re not shooting, we dock the batteries and plug the sled into the Anton/Bauer CA-ARRI CINE VCLX cable. We then have that battery on a sling hanging off my stand and plugged into ‘shore power.’ This way, when I need to pick it up, we just disconnect it and run the batteries onboard,” he says. “If it weren’t for the DIONIC HC, I would not be able to power this type of camera on a Steadicam and have that kind of dependability.”

The DIONIC HC was designed to handle the demands of today’s power-hungry equipment, utilizing advanced lightweight, high-current and high-capacity lithium-ion cells. The HC series utilizes a honeycomb design to protect cells from punctures and minimize damage if a battery is dropped during production. The 91Wh DIONIC HC sustains a 10-amp draw and can operate a 40-watt HD camera for more than two hours. It includes a motion-detection feature that incorporates a “deep sleep” setting, reducing battery self-discharge, which allows for extended periods of storage with minimal capacity loss. The battery can be “awakened” by the built-in motion sensor. To ensure precise run-time data and superior reliability, the DIONIC HC includes an enhanced RealTime® LCD that indicates both fuel gauge and remaining run-time data simultaneously. Capable of being transported as carry-on luggage without restrictions, the DIONIC HC is the perfect lightweight battery for shooting on location.*

The HyTRON 140 is a high-power NiMH battery system ideally suited to the power demands of today's high definition equipment and on-camera lighting systems. In lower-power applications, it can provide power for many hours without limits or travel restrictions. The HyTRON 100/140 models also offer an excellent counterbalance to offset the weight of a lens. The 140Wh HyTRON 140 typically provides up to four hours of run time with a single battery. As with the DIONIC HC, it offers the RealTime display.

In addition to working on feature films, which have included such hits as Madea's Witness Protection, The Other Guys and I Am Legend, Fagan works with leading consumer brands and networks for commercial production. “I worked on two large Nike commercials this year, and the convenience and longevity of Anton/Bauer batteries really came into play,” he says. For the commercial titled “I Would Run to You,” Fagan and his team traveled across the U.S., following a long-distance couple who decide to run toward each other from opposite coasts until they met up. “We shot 16-hour days, ultimately producing a complex, two-and-a-half-minute commercial that was precisely choreographed to the song’s lyrics. We ran the camera, pre-amps, wireless equipment and monitors all off Anton/Bauer CINE VCLX batteries and were able to charge the batteries in the vehicles on location. Knowing we’d be able to complete the day’s filming made the production trouble-free—if you don’t have power, you’re not working.”

“I can’t tell you how many times over the years people say ‘Thank God you have these or we’d be stuck’,” adds Fagan. He acknowledges, however, that when he has needed help, he can rely on Anton/Bauer’s global customer support. “They have supported me with great products, service and rock-solid personalized support through the years. They listen to my needs and answer with gear that gets the job done around the world,” he says. “Whether I'm shooting a feature in Ethiopia or a television show in New York, Anton/Bauer products are known around the world. They are truly the gold standard everywhere.”

*All carry-on/checked baggage passenger rules should be verified with your specific carrier prior to travel.

About Anton/Bauer
Anton/Bauer is recognized as the world’s innovator and a premier provider of batteries, chargers, lighting and other key mobile power systems for the professional broadcast, video and film and healthcare technology industries.  Based in the United States in Shelton, CT with offices in Europe and Asia, Anton/Bauer was established in 1970 and has expanded its product offerings to include many signature lines such as its leading Gold Spectrum™ Series, Gold Mount® system, InterActive® chargers and Logic Series® batteries such as the HyTRON® 50, 100 and 140, and DIONIC® 90, HD, HC and HCX. Their products are compatible with every camera brand on the market today.  Other Anton/Bauer high performance products include the Ultralight® 2, ElipZ®, CINE VCLX and the Tandem 150 Modular Charging System. Their superior-quality products have become an industry standard.