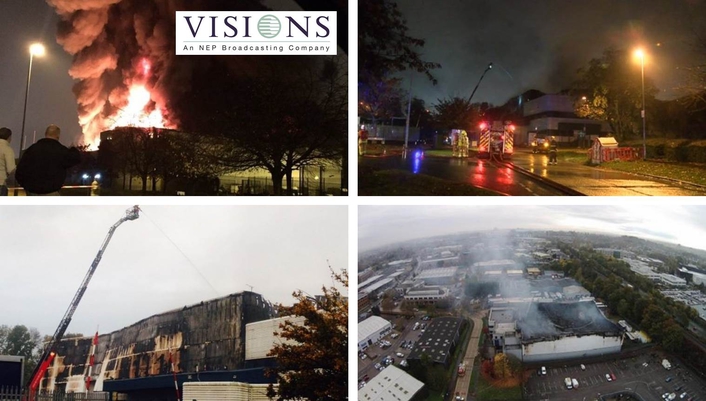 NEP Visions’ Bracknell premises and OB fleet suffered damage in a major fire on the night of 3 November 2015. The NEP Visions team is in close communication with its clients to ensure that forthcoming shows and events continue without disruption, and will be working with other divisions of the NEP Group to draw on additional resources. No staff members were injured in the fire. NEP Visions is very grateful for all the messages of support it has received from clients, partners, competitors and the wider broadcast industry.

Firefighters have spent much of the night tackling the fire at the industrial estate in Berkshire. The fire broke out at the TV production company, NEP Visions Ltd at the Western Industrial Estate in Bracknell, shortly after 22:00 GMT on Tuesday. The blaze has caused the building to collapse, Royal Berkshire Fire and Rescue Service said, confirming crews remained on site.

Thames Valley Police said no injuries had been reported.

NEP Visions is the largest independent outside broadcast facilities company in the UK and amongst the largest in Europe, with over 30 years’ experience of delivering first class outside broadcast facilities and services for the production of television in all genres across the world. A leader in HD production facilities, having been involved in its first HD productions in 2003 and at the forefront of the development of this standard ever since, Visions has one of Europe's most extensive range of OB and production facilities providing the very latest in technical standards, including 3D. Its facilities include a fleet of 20 trucks plus edit facilities, extensive HD OB fly-pack facilities, production offices, studio facilities and much more. Visions’ extensive list of credits includes the Olympic Games, football and rugby World Cups, host facilities provider to the Asian Games, Premier League and Champions League football and a host of music and light entertainment events all over the world. NEP Visions is an NEP Broadcasting Company.