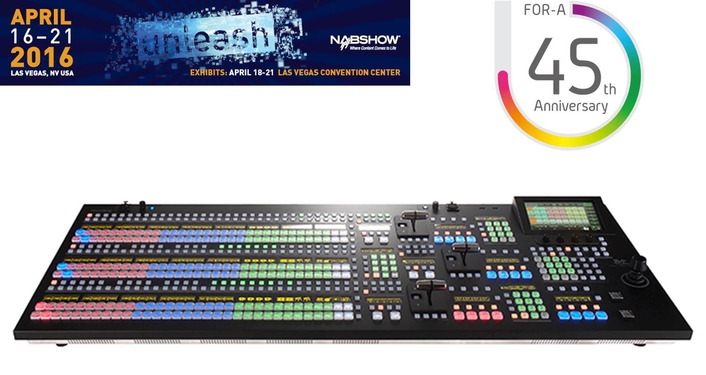 At next month’s NAB Show, to be held April 16-19 in Las Vegas, FOR-A will showcase a wide range of 4K technology and key product integration solutions for every step of the video production workflow. The company will specifically focus on solutions ideal for sports, 4K and live productions, and in celebration of its 45th anniversary, will showcase a variety of solutions aligning with its show theme of ‘FOR-A World of Possibilities’ in Booth C5117.

“As we celebrate FOR-A’s 45th anniversary this year, I’d like to thank everyone for their patronage with our utmost gratitude,” said Katsuaki Kiyohara, President of FOR-A Company Limited. “We’re proud to mark 45 years of company success, and look forward to continuing our growth in the years to come. FOR-A is committed to the theme of unlimited possibility and innovation in video and audio technology.”

FOR-A’s NAB 2016 booth will showcase solutions covering every aspect of video production, from shooting and production to contribution, file management and playout. The booth is divided into seven areas, and will feature three solutions-based exhibition areas that will highlight equipment for sports production, live production and 4K applications. All three of these areas will feature the popular HVS-2000 video switcher as the core component of the production workflow.

In the live production booth area, video production equipment for use at concerts and live events will be highlighted. FOR-A will showcase product integration between the HVS-2000 video switcher, MFR-3000 routing switcher and FA-1010 multi-channel color corrector. Additionally, a multi-operation satellite panel system, ODYSSEY’s Insight video server, and Renewed Vision’s ProPresenter media presentation software will all be on display in this area of the booth.

FOR-A’s 4K production area will showcase an impressive lineup of 4K products, including the FT-ONE full 4K variable frame rate camera. This area will display how the FT-ONE and FOR-A’s HVS-2000 and other video switchers can be used as a combined system in 4K production environments.

Also on the 4K front, FOR-A’s shooting area of the booth will also showcase the newest version of the FT-ONE, the FT-ONE-S. The smaller and lighter FT-ONE-S allows operators to separate the camera head from the body for greater mobility, and can capture all of the action at up to 360 frames per second (fps).  Also on display will be FOR-A’s ZE-ONE zoom extraction system and FC-ONE flicker corrector, which automatically removes flicker effects that occur while shooting.

In the booth’s virtual studio area, one product being introduced is the ACK-3000 Advanced 3D Chroma Keyer – a 1 R/U solution that generates a virtual human shadow with 3D graphic technology. Ideal for news, sports, and commercial production, the shadow light feature creates the illusion of a person realistically being at another on-screen location. Also to be shown in this area is the Thunderbolt 2 interface card, the HVS-100TB2, which can be used with FOR-A’s HVS-2000 and HVS-100/110 video switchers to build a compact virtual system.

In FOR-A’s file-based solutions area, the LTS-70 server with LTO-7 archiving technology will be shown with the new LTR-200HS7 video archive recorder. An array of video server and file management system solutions will also be on display.

There will also be an area dedicated to the ‘FOR-A World of Possibilities’ theme that will introduce advanced, cutting-edge technology from the company, including 4K 2SI, 12G-SDI, HDR, Wide Color Gamut and 8K products.