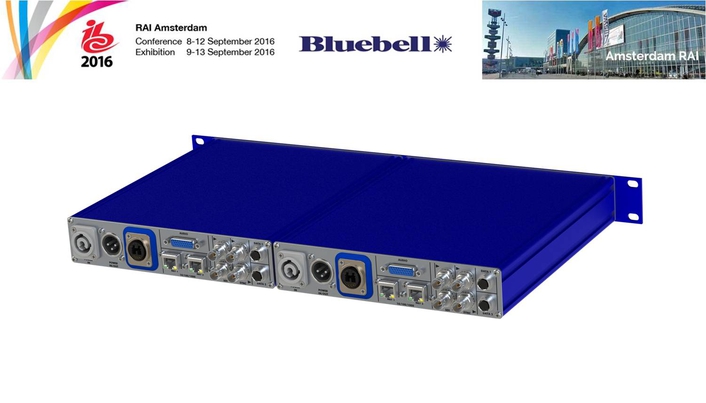 NEW BCX-760 Series 10G Ethernet Point-to-Point Fibre Link
Making its European debut is Bluebell Opticom's BCX-760 Series 10G Ethernet point-to-point fibre link, a camera-back interface that allows easy connection and signal transport between a camera and an outside broadcast (OB) truck or a base station. In a first for the industry, BCX interfaces map all signals presented at the back of any broadcast camera onto a 10G Ethernet point-to-point link, ensuring safe, robust, interference-immune, high-quality transport over much longer distances than have been possible before.

The BCX-760 Series products are designed to create rugged connections in a range of OB environments such as special-event venues, ENG sites, sports arenas, and golf courses. They can also serve as a replacement for heavy SMPTE hybrid connections on cameras in a studio setting, and in certain variations can be deployed to link and control remote robotic cameras. The BCX range will transport both digital 3G-SDI program video and return video, as well as composite feeds for genlock, analogue audio for intercom signals, and Gigabit Ethernet for network access. A single lightweight fibre cable eases rigging, and users can link multiple cameras over the same cable using Bluebell's muxing and wavelength-management systems. 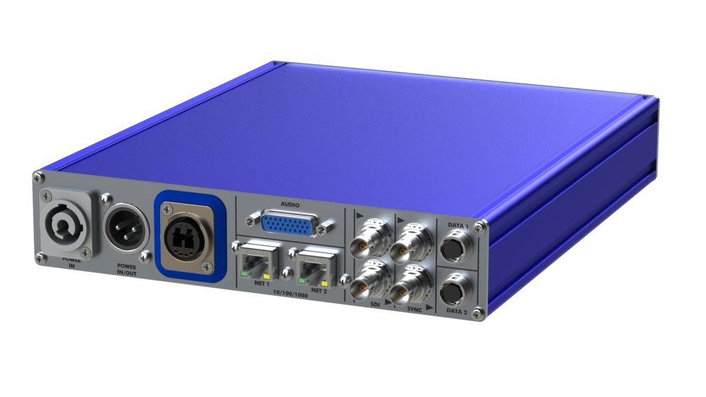 TDM-750 HD-SDI Module With Ethernet Fibre Interface
Also on display at IBC2016 will be the TDM-750, a rack-mounted module for single-direction transport of HD-SDI and 100Base-T Ethernet signals. Requiring only two fibres with an option for single-fibre operation, the TDM-750 is perfect for smaller robotic/POV camera systems that require only a single video path and bidirectional data via Ethernet. The unit can be used widely in broadcast and security applications. 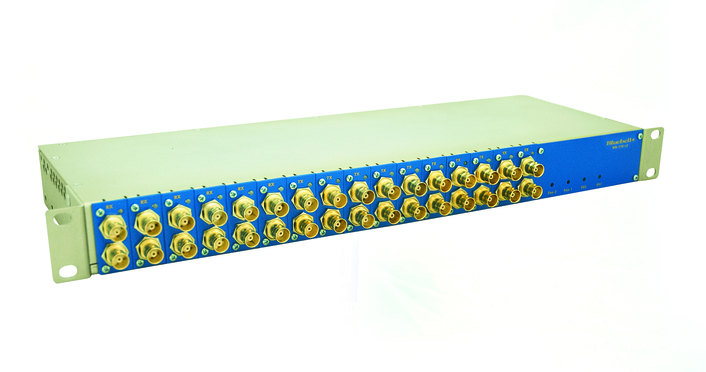 BC364 Wavelength-Management System With Remote Monitoring
The BC364 multiformat interface takes in multiple optical signals and retransmits them at wavelengths that can be inserted into a CWDM mux. On the other end of the link, the signals are returned to their individual state. This functionality, coupled with Bluebell's ShaxX power-insertion technology, is what makes camera multiplexing possible. In this application, the BC364 is packaged with ShaxX in a flight case to facilitate the operation of multiple broadcast HD-SDI camera systems over a single fibre. Remote monitoring capabilities make it easy and convenient to oversee the system from a distance via a network connection. 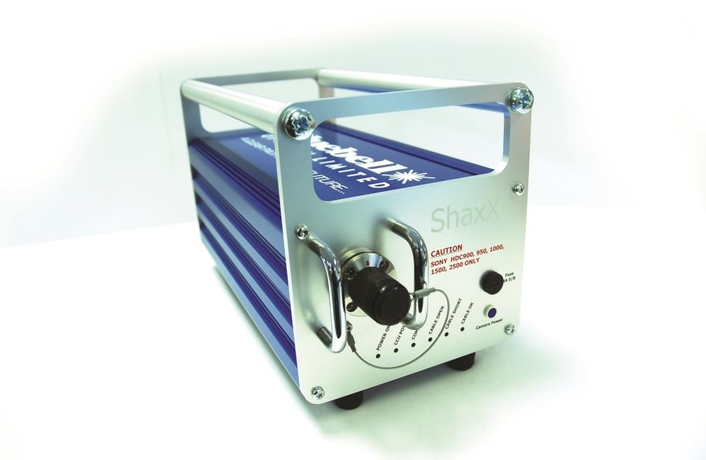 ShaxX SMPTE Hybrid Cable Alternative With Power Insertion for Broadcast Cameras
At IBC2016 visitors will see Bluebell Opticom's ShaxX, a rugged system designed to provide full bidirectional signalling and power for broadcast cameras fitted with standard SMPTE 304M hybrid connectors. The ShaxX allows OB and remote production crews to forgo SMPTE hybrid cables and take advantage of preinstalled fibre networks on location in order to cut rigging time and position cameras freely wherever they are needed, regardless of distance or the location of mains power sources.

The ShaxX works with Bluebell's ShaxX hybrid alternative interface to provide power to the camera without having to transport it from a remote CCU. Users can multiplex complete camera chains onto a single duplex single-mode fibre and power them locally. Furthermore, using Bluebell's popular BC Series footprint, ShaxX offers a complete wavelength-management capability while providing all camera and CCU communications. In this way, users can easily deploy up to 16 cameras and connect them over a single cable.

WB170 Converter System for Compact 1-RU 3G-SDI, HD-SDI, SD-SDI, and ASI Transport
Bluebell Opticom's IBC2016 stand will also be the stage for the WB170, an ultra-compact 19-inch rack-mount media converter for converting up to 32 independent 3G-SDI, HD-SDI, SD-SDI, or ASI signals onto fibre. The WB170 can be populated with WB172 transmitter or receiver cards inserted in the front of the frame, and additional frame options are available in a fixed format in popular configurations. The attractively priced variants will include electrical-to-optical conversion and optical multiplexing.

Also making its IBC2016 debut will be the latest addition to the WB170 system, the WB172-63 card for format conversion and HDMI monitoring within the WB170 frame. A compact rack-based multiformat converter for use with a wide range of broadcast signals, the WB172-63 features a base unit comprising two SFP cages. Through the use of different SFP converter modules, the unit's functionality can be adapted to suit different applications. The WB172-63 card offers a cost-effective range of options such as distribution, format conversion, monitoring, and wavelength management including CWDM.

Bluebell Opticom designs and manufactures high-quality fibre optic links for the broadcast, telecommunications, and satellite industries. Its products are used for the critical delivery of video, audio, and data services at live world-class sporting events and other situations requiring the transport of high-bandwidth signals over long distances. Applications range from robust outside broadcast links to complex fixed installations over fibre backbones.

With products in use the world over, Bluebell Opticom counts many of the top OB providers and networks among its clients. The company serves customers directly and through a select global network of partners and distributors.