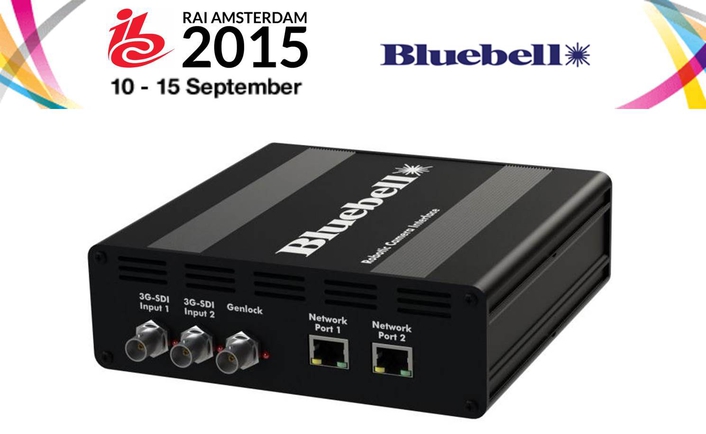 "At IBC2015 we will feature two new solutions to support remote robotic cameras. Each has features, packaging, and options that make it flexible enough to handle almost any remote camera requirement at very competitive prices. Also, remote-monitoring capabilities have arrived for our BC364 and ShaxX products! These capabilities remove the complexity from optically multiplexing signals. We are very much looking forward to seeing our customers and partners in September."
— Paul McCann, General Manager, Bluebell Opticom

BN385 Stand-Alone Remote Robotic Camera Interface With Dual Ethernet Ports
At IBC2015, Bluebell will introduce the BN385 remote robotic camera interface. The BN385 features two 3G-SDI paths from the camera position with an optional genlock return, plus a dual-port GigE link on two monomode fibres with optional single-fibre operation. The interface is ideally suited for links to robotic/POV cameras, and a typical application would use one of the HD paths for PGM video, the other for viewfinder overlay/menus, and the GigE link for camera control and pan-tilt-zoom camera operation. The unit is packaged in a robust stand-alone enclosure for use in an OB environment, but it also can be used with a BC series rack at the equipment room/truck end of the link. The unit has an IEC mains input (100-250 VAC) with a local DC output to power the camera.

TDM750 HD-SDI Module With Ethernet Fibre Interface
Also making its debut at IBC2015 is the TDM750, a rack-mounted module for single-direction transport of HD-SDI and 100BaseT Ethernet signals. Requiring only two fibres with an option for single-fibre operation, the TDM750 is perfect for smaller robotic/POV camera systems that require only a single video path and bidirectional data via Ethernet. The unit can be used widely in broadcast and security applications.

BC364 Wavelength Management System With Remote Monitoring
First demonstrated at the 2015 NAB Show and now available for shipping, the BC364 multiformat interface takes in multiple optical signals and retransmits them at wavelengths that can be inserted into a CWDM mux. On the other end of the link, the signals are returned to their individual state. This functionality, coupled with Bluebell's ShaxX power insertion technology, is what makes camera multiplexing possible. In this application, the BC364 is packaged with ShaxX into a flight case to facilitate the operation of multiple broadcast HD-SDI camera systems over a single fibre. New remote-monitoring capabilities make it easy and convenient to oversee the system from a distance via a network connection.

Company Overview:
Bluebell Opticom designs and manufactures high-quality fibre optic links for the broadcast, telecommunications, and satellite industries. Its products are used for the critical delivery of video, audio, and data services at live world-class sporting events and in other situations requiring the transport of high-bandwidth signals over long distances. Applications range from robust outside broadcast links to complex fixed installations over fibre backbones.
With products in use worldwide, Bluebell Opticom counts many of the top OB providers and networks among its clients. The company serves customers directly and through a select global network of partners and distributors