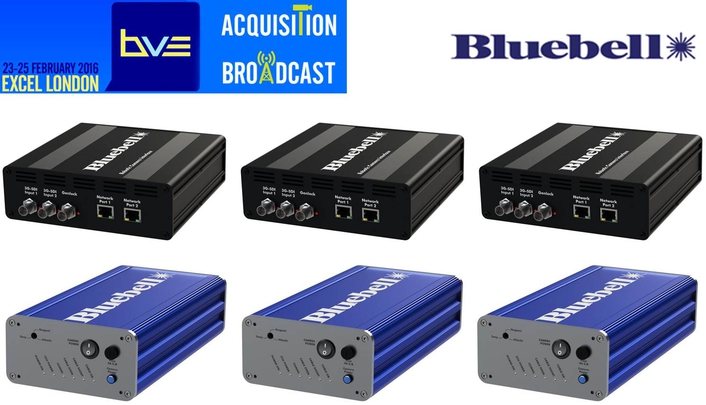 "At BVE 2016, we're looking forward to presenting our fibre-based systems for the efficient and cost-effective transport of AV signals. In addition to our solutions to support remote robotic cameras and remote-monitoring capabilities for our BC364 and ShaxX products, we're excited to showcase ShaxX Lite — a real problem-solver in a lightweight package that lets crews use existing fibre to extend their distance from the CCU."
— Paul McCann, Managing Director, Bluebell Opticom

BN385 Stand-Alone Remote Robotic Camera Interface With Dual Ethernet Ports
At BVE 2016 Bluebell will feature its BN385 remote robotic camera interface. Ideally suited for links to robotic/POV cameras, the BN385 features two 3G-SDI paths from the camera position with an optional genlock return, plus a dual-port GigE link on two monomode fibres with optional single-fibre operation. A typical application would use one of the HD paths for PGM video and the other for viewfinder overlay/menus, with the GigE link used for camera control and pan-tilt-zoom camera operation. The unit is packaged in a robust stand-alone enclosure for use in an OB environment, but it also can be used with a BC series rack at the equipment room/truck end of the link. The unit has an IEC mains input (100-250 VAC) with a local DC output to power the camera.

TDM-750 HD-SDI Module With Ethernet Fibre Interface
Also on display at BVE 2016 is the TDM-750, a rack-mounted module for single-direction transport of HD-SDI and 100BaseT Ethernet signals. Requiring only two fibres with an option for single-fibre operation, the TDM-750 is perfect for smaller robotic/POV camera systems that require only a single video path and bidirectional data via Ethernet. The unit can be used widely in broadcast and security applications.

BC364 Wavelength Management System With Remote Monitoring
The BC364 multiformat interface takes in multiple optical signals and retransmits them at wavelengths that can be inserted into a CWDM mux. On the other end of the link, the signals are returned to their individual state. This functionality, coupled with Bluebell's ShaxX power insertion technology, is what makes camera multiplexing possible. In this application, the BC364 is packaged with ShaxX into a flight case to facilitate the operation of multiple broadcast HD-SDI camera systems over a single fibre. New remote-monitoring capabilities make it easy and convenient to oversee the system from a distance via a network connection.

ShaxX Lite/SMPTE Hybrid Cable System for Power Insertion in Remote Broadcasting
BlueBell will showcase ShaxX Lite, a smaller, lighter version of the company's ShaxX system for providing full bidirectional signalling and power for broadcast cameras fitted with standard SMPTE 304M hybrid connectors. ShaxX Lite offers outside broadcast and remote production crews the same power insertion alternatives and distance benefits as the full-sized ShaxX system, but at half the weight. ShaxX Lite works with Bluebell's Shax hybrid alternative interface to provide power and bi-directional signalling to the camera, thereby removing the expense and effort of rigging SMPTE hybrid cables. By forgoing SMPTE hybrid cables, crews can take advantage of preinstalled fibre networks on location in order to cut rigging time and position cameras freely wherever they are needed, regardless of distance or the location of mains power sources.

Company Overview:
Bluebell Opticom designs and manufactures high-quality fibre optic links for the broadcast, telecommunications, and professional AV industries. Its products are used for the critical delivery of video, audio, and data services at live world-class sporting events and venues requiring the transport of high-bandwidth signals over long distances. Applications range from robust stand-alone links to complex fixed installations over fibre backbones.
With products in use worldwide, Bluebell Opticom counts many of the top blue chip companies and networks among its clients. The company serves customers directly and through a select global network of partners and distributors.