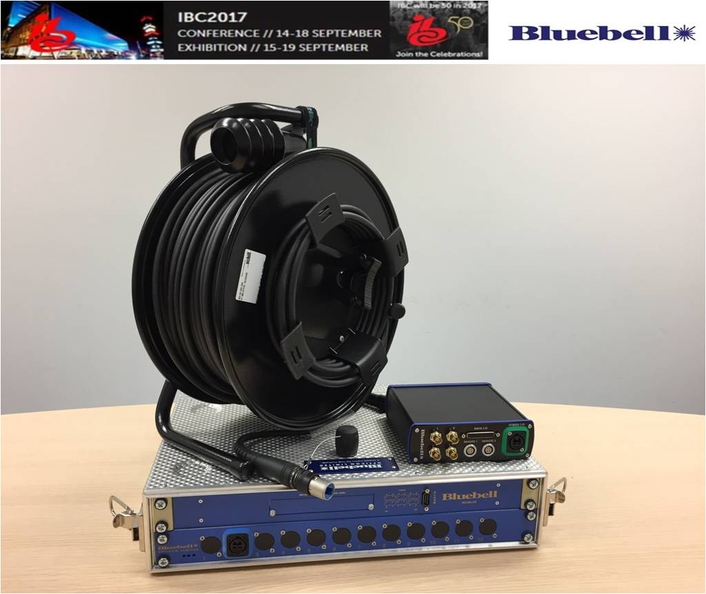 Bluebell Opticom Ltd., provider of innovative fibre optic solutions for fixed and remote applications, today announced the launch of the Hothead Silhouette, an end-to-end, self-contained power, control, and video tool for 4K robotic-camera productions. Hothead Silhouette replaces copper cabling with one hybrid cable and, more importantly, allows camera operators to sit far away from the robotic head — a combination of benefits not previously available in conjunction with 4K UHD production and remote powering.

Intended for ingest and production of live events at sports arenas, theatres, stadiums, and other venues, the Hothead Silhouette combines 4K UHD transport, an open-architecture data-control system, and up to 60 watts of power insertion to run the robotic camera head — all in a self-contained, fully integrated system. By placing the portable unit between the robotic camera head and the base station and adding an external interconnect, users can remotely power, control, and receive 4K UHD pictures from a robotic camera head over a single hybrid fibre cable at distances up to 20 kilometres.

As a result, instead of standing on the wings of a stage using copper cables to connect to the robotic heads, operators can now be several tens of kilometres away if required and still have full control. They can manage the robotic heads from the same place as the standard manned cameras, and all control, services, and ingest can be sent via fibre to the production truck and consolidated with the other production facilities.

"The whole idea behind a robotic camera head is that the operator can be located away from the camera, while the heads can be put in places manual cameras can't get to. It's a great notion, but it's sometimes hard to put into practice given the challenges of distance and power, especially with data-heavy 4K shoots," said Paul Felix McCann, managing director, Bluebell Opticom. "Hothead Silhouette eliminates those challenges so operators can control robotic camera systems from a warm, dry cabin or OB truck rather than being perched on the side of a stage — or worse, underneath it — at any live event."

Hothead Silhouette is part of Bluebell's successful Silhouette range of throw-down units aimed at ingest, remote production, power, and camera control. The product is available now and will be on display at IBC2017 on stand 10.F24.